Disaster' looms as Hurricane Harvey bears down on Texas

Hundreds of thousands of people on the US Gulf Coast were urged to flee the path of Hurricane Harvey Friday as Texas and Louisiana braced for "catastrophic" flooding from the powerful category two storm barreling in to shore. 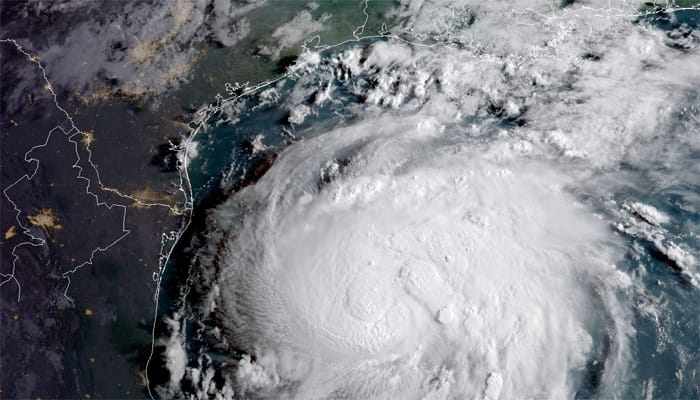 Texas: Hundreds of thousands of people on the US Gulf Coast were urged to flee the path of Hurricane Harvey Friday as Texas and Louisiana braced for "catastrophic" flooding from the powerful category two storm barreling in to shore.

Roaring towards land with winds whipping up to 110 miles (175 kilometers) an hour, the category two hurricane is predicted to make landfall late Friday or early Saturday as a much more powerful category three storm.

If National Hurricane Center (NHC) forecasts hold, Harvey would be the strongest storm to hit the US mainland in 12 years, packing winds of 130 miles per hour and creating the potential for "life-threatening and devastating" floods in an area that processes some seven million barrels of oil a day.

"Texas is about to have a very significant disaster," Brock Long, director of the Federal Emergency Management Agency (FEMA), told CNN. "Their window to evacuate is rapidly coming to a close," he said.

Corpus Christi -- a major oil refining center where the hurricane was projected to make landfall Saturday morning -- has issued voluntary evacuation orders, while the evacuation was made mandatory in the nearby coastal hamlets of Port Arkansas and Arkansas Pass.

"For anyone who has not already evacuated, please hurry to do so," the city of Portland, Texas warned on its website in capital letters.

Many residents were bent on sitting the storm out, however, like in Corpus Christi were people were seen packing sandbags to protect their homes from flooding.

Officials in Houston, the biggest city in the path of the storm, canceled school classes through Monday although officials said they did not anticipate an evacuation at this stage. Harvey was bearing northwest at 10 miles per hour as of 10 am central time (1500 GMT) on Friday.

The first major storm of the annual Atlantic hurricane season, Harvey was expected to dump as much as 35 inches (89 centimeters) of rain in some parts of Texas through next Wednesday.

"Catastrophic flooding expected across portions of southern and southeastern Texas," the NHC warned in its latest advisory.

Houston is braced for some 20 inches of rainfall, with a risk of dangerous flash flooding across the region.

FEMA chief Long said the most pressing danger was the storm surge -- set to reach between six and 12 feet (1.8 and 3.7 meters) above ground level in the worst-hit part of the Texas coast -- but that many counties inland should also prepare for a "significant inland flood event."

With one-third of the US refining capacity potentially under threat, several energy companies evacuated personnel from oil and gas platforms in the heart of the US "Refinery Row."

One oil drilling rig in the Gulf of Mexico has been evacuated, as well as 39 manned production platforms, according to the Bureau of Safety and Environmental Enforcement, representing an estimated 9.5 percent of oil output and 14.7 percent of natural gas output in the Gulf.

"Harvey`s greatest risk to refiners is not just wind damage to the refineries, but also the associated rainfall and the potential for electric power failure," said James Williams of WTRG Economics.
Should a refinery shut down, he said it could take a week to get it up and running again.

President Donald Trump weighed in with a tweet -- "As #HurricaneHarvey intensifies - remember to #PlanAhead" -- while Texas Governor Greg Abbott issued disaster declarations in 30 counties, a preemptive move allowing the state "to quickly deploy resources for the emergency response effort."

In neighboring Louisiana where the storm was forecast to hover for many days and could deluge flood-prone New Orleans, Governor John Bel Edwards said he spoke with the president who "offered his full support."

"This is going to play out over the next week or so," Edwards told a news conference, "which makes it particularly dangerous."

Edwards issued an emergency declaration for his entire state, and hundreds of boats were made ready for potential rescues along with more than half a million sandbags to hold back floodwaters.

In New Orleans, where Hurricane Katrina in 2005 caused widespread flooding and killed more than 1,800 people, Mayor Mitch Landrieu told journalists that high-water rescue vehicles and boats were at the ready -- although there were no evacuations planned.

"We just need to make sure that we`re prepared," Landrieu said.

Sanctions not aimed at Chinese, Russian govts but entities: US