This comes after Prime Minister Narendra Modi on Thursday attacked the NCP supremo for not "having the courage" to contest the Lok Sabha polls from the parliamentary constituency. 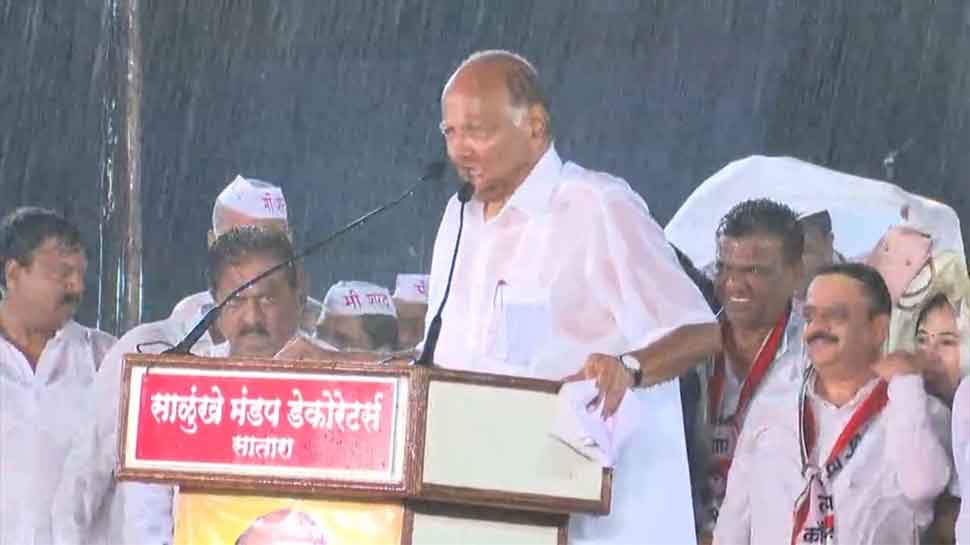 Satara: As the campaigning for the upcoming elections in Maharashtra and Haryana as entered its last phase, even torrential rain has failed to clamp down the spirits of political leaders. Drenched in rain, National Congress Party chief Sharad Pawar addressed a rally in Maharashtra's Sitara and admitted his “mistake” in choosing candidates for the Lok Sabha elections 2014 in Satara district, his party bastion.

This comes after Prime Minister Narendra Modi on Thursday attacked the NCP supremo for not "having the courage" to contest the Lok Sabha polls from the parliamentary constituency.

"They don't even have the courage to contest even Lok Sabha elections from Satara," PM Modi said while addressing a rally in Satara as he targeted the 80-year-old NCP leader. PM Modi had hit out at opposition parties in Maharashtra of playing divisive politics and for not supporting the Centre’s stand after it scrapped the special status of Jammu and Kashmir in August.

During the recently-concluded Lok Sabha elections earlier in 2019, the NCP had fielded Shivaji Maharaj's descendant Udayanraje Bhosale from Satara. However, Bhosale quit the party ahead of Maharashtra state elections on October 21 and joined the BJP.

Addressing a rally on Friday in Satara, Pawar admitted to the mistake and said, "I picked the wrong candidate during the Lok Sabha elections. I openly accept it. But I am happy that people of Satara are waiting for October 21 to rectify that mistake," he said," he added.

The NCP patriarch continued to address the crowd despite heavy rain. "The rain god has blessed the NCP for the October 21 election. And with the blessings of the rain god, Satara district will create a miracle in Maharashtra. That miracle will begin from October 21," news agencies quoted Pawar as saying.

NCP is contesting election in alliance with the Congress in Maharashtra where 288 seats are at stake. The state will go to polls on October 21 and the counting of votes will take place on October 24.

Haryana assembly election 2019: Of 1,169 candidates, only one-fourth are women