Surgical strike, Balakot not mere words, but identity of BJP and its allies: PM Narendra Modi

As the campaigning for the upcoming assembly election in Maharashtra as reached its last leg, Prime Minister Narendra Modi on Friday addressed a pubic rally in Mumbai and said that surgical strike and Balakot were not just two-three words, but they were the identity of BJP and its allies' political policy. 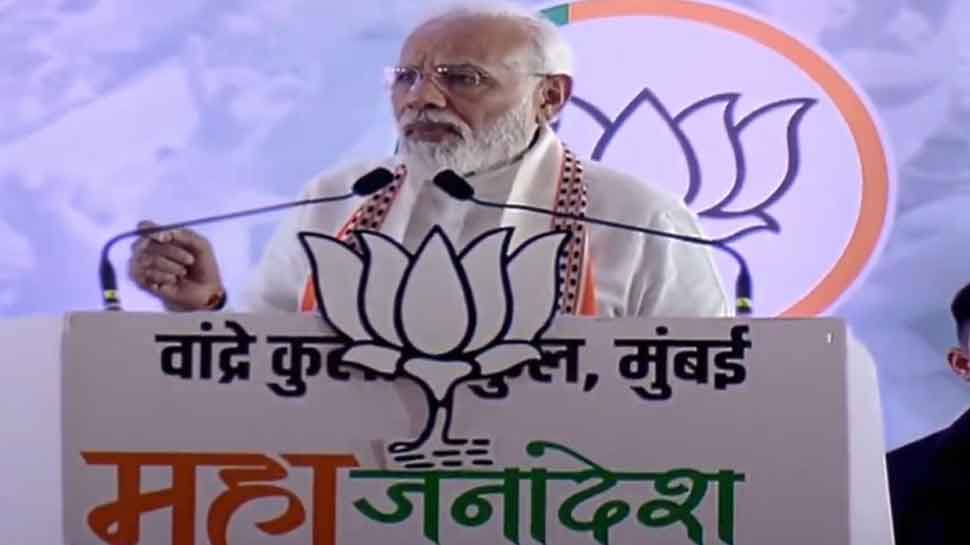 Mumbai: As the campaigning for the upcoming assembly election in Maharashtra as reached its last leg, Prime Minister Narendra Modi on Friday addressed a pubic rally in Mumbai and said that surgical strike and Balakot were not just two-three words, but they were the identity of BJP and its allies' political policy.

Saying that Mumbai has been a victim of several terror attacks, PM Modi attacked the Congress and its allies and said why did Congress fail to take any step when every investigation revealed that terror attacks were being carried out from across the border. PM Modi further said that terror outfits would themselves take responsibility for the attack, yet Congress would only blame people of its own country.

PM Modi further lashed out at Congress and said that these were the same people who nurtured Article 370 and Article 35A for decades. "Due to this, terrorism and corruption increased in the valley. Several people were deprived of their rights but the Congress and its allies continued to do their self-interest politics," PM Modi added.

We have taken the historic step of removing Article 370 and 35A but these people (Congress) speak the language of our opponents instead of standing in solidarity with Jammu and Kashmir and Ladakh, PM Narendra Modi said in an apparent reference to Pakistan using Congress' statements to carry out its anti-India rant.

Addressing the rally, PM Modi said that the country was bigger than the party for all its members. "Politics is the medium of service for us. We are BJP people, with Mumbai we have a connection of the womb as we were born here. Therefore, it is our natural responsibility to serve the people of Maharashtra, PM Modi said.

PM Modi said that in the last five years, the National Democratic Alliance-led central government has not had a single stain of corruption. Every dream from Shetkari to startups is being fulfilled. Most services have been digitized and corruption is at its lowest.

Earlier on Thursday, Congress leader Rahul Gandhi addressed a poll rally in Haryana and hit out at the Narendra Modi-led BJP government saying that wherever they (BJP) go, they make people fight, be it Hindu-Muslims, Jat-non Jat.

Gandhi also alleged that Prime Minister Modi has no understanding of the economy and the world is mocking India due to his government’s divisive politics that pitted people against each other.

Elections in Maharashtra and Haryana are scheduled for October 21 and the results will be announced on October 24.