Watch: Man who held a model hostage in Bhopal beaten up by women

The man, identified as Rohit Singh, had held a 26-year-old woman, who is a model, hostage on Friday. 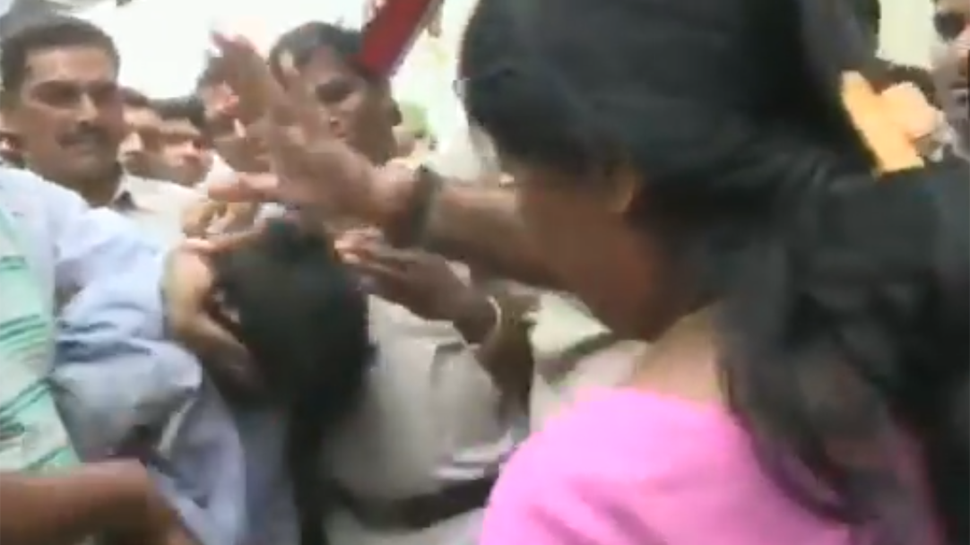 A man in Bhopal, who kept a model hostage for over 12 hours, was on Saturday beaten up by some women as he was arrested by the police. A video of the incident was released by news agency ANI wherein some women could be seen slapping and hitting the man with slippers.

#WATCH: Women thrash the man who held a girl hostage in her house in Bhopal yesterday, claiming he loves her & wants to marry.The girl was later rescued & sent for medical treatment. #MadhyaPradesh pic.twitter.com/xDqwJSthoA

The man, identified as Rohit Singh, had held a 26-year-old woman, who is a model, hostage on Friday. She could be rescued by the police at 7 pm on Friday after negotiations with Singh. After being rescued, the woman was rushed for to a hospital for medical examination and first aid as she had received minor injuries.

Singh had demanded that the woman should marry him as he loves her. He had held her hostage in the fifth floor apartment residence of the model in Misrod area on Madhya Pradesh’s Bhopal. The incident was shown by the local media on live television in the city.

Singh too was injured when he held out a gun from an open door and a policeman tried to snatch it, officers said, adding that he too was taken to hospital. "Both did not sustain fatal injuries," City (North) Superintendent of Police Rahul Lodha told reporters.

"The operation took long. We held a series of conversations with him over video calls to ensure that the woman remained safe," the SP said. "We succeeded (around 7 pm) finally when we had a face-to-face talk with him through the window (with police negotiators perched atop a hydraulic ladder)," he said.

Throughout the day police kept up the supply of food, glucose and water to Singh to ensure that the woman and he himself stayed in good health. The episode began when Singh, who claims to be an aspiring model, knocked on the woman's door around 7 am. She opened the door and the two had an altercation.

He took her to a room at gunpoint and bolted it from inside, said Inspector Sanjeev Chouse of Misrod police station.

Then he sent a video to a TV journalist through his mobile phone, saying the police and the woman's family were opposed to their marriage so he was holding her hostage. He shared another video sometime later, showing the woman lying on bed with bloodstains all around the room.

Soon, police and the media reached the spot, and police began persuading him to free the woman. Singh, who hails from Aligarh in Uttar Pradesh, kept speaking to both the media persons and police by video calls, saying he wanted to marry the woman, and he would kill himself if they did not get married.

Singh and the woman had met in Mumbai around two years ago when she was pursuing her modelling career, and he fell in love with her while she apparently had no feelings for him, the police said. After he allegedly started harassing her, her family had lodged a complaint against him in January, they said, adding that further details would come out during his questioning.