The Congress' Jan Aakarshan rally was also held at the same venue and was also the first mega rally by the party in many years in the state. 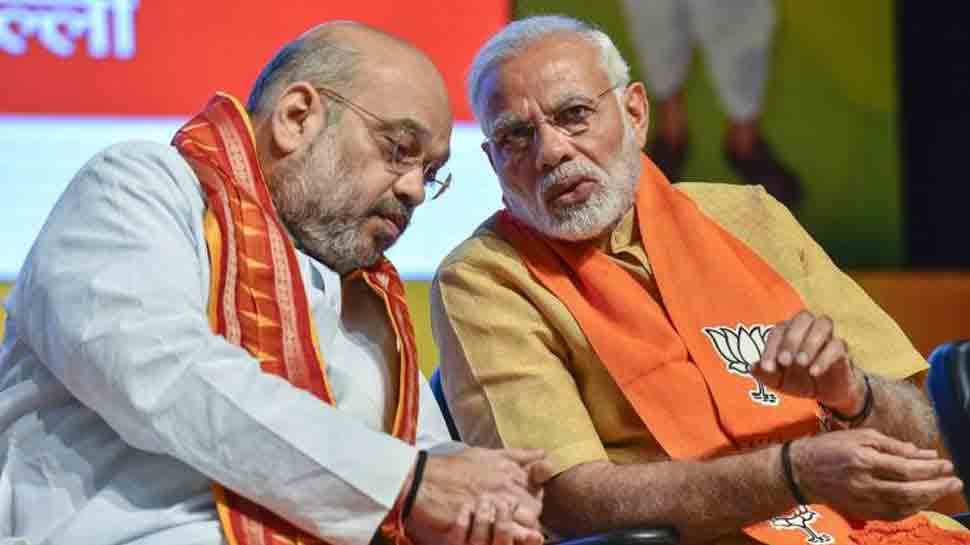 Patna: Prime Minister Narendra Modi and BJP President Amit Shah will address a NDA Sankalp Rally here in Bihar on March 3 that will be a show of strength for the alliance and a reply to the Congress' Jan Aakansha Rally, garnering the largest ever political gathering in Patna.

With just nine days to go for the rally the Bharatiya Janata Party (BJP) along with its two allies Janata Dal-United (JD-U) and Lok Janshakti Party (LJP), is putting together all collective social and political resources to counter the February 3 Jan Aakansha Rally by Congress President Rahul Gandhi, where its Grand Alliance partner Rashtriya Janata Dal was also present.

The NDA leaders along with thousands of BJP workers, Bihar Chief Minister Nitish Kumar`s JD-U and Union Minister Ram Vilas Paswan`s LJP members have taken to the streets to reach out to people, particularly their supporters in rural, as well as urban pockets for the upcoming rally.

The party enthusiasts are busy campaigning in villages, panchayats, blocks, sub-divisions and district headquarters to garner the largest numbers ever to congregate at the Gandhi Maidan.

The Congress' Jan Aakarshan rally was also held at the same venue and was also the first mega rally by the party in many years in the state.

"The NDA`s Sankalp Rally is going to be more than 10 times bigger than Rahul Gandhi`s rally. People will realise it," BJP state chief Nityanand Rai said.

Bihar`s JD-U chief Vashisht Narain Singh said the NDA will leave nothing to chance to organise the biggest ever rally here. "We have been mobilising our party leaders, workers and supporters to persuade people to attend the rally in large numbers."

The Sankalp Rally will be the first joint rally of Narendra Modi-Nitish Kumar and their first big show after Nitish Kumar joined hands with the BJP in July 2017 after dumping the RJD and the Congress.

Nitish Kumar had ended his 17-year-old alliance with the BJP in 2013 following the rise of Modi ahead of the 2014 Lok Sabha polls.

Rai told IANS that the BJP, JD-U and LJP leaders were busy addressing rallies in rural and urban areas requesting their supporters to attend the rally to show their strength.

Nitish Kumar and Sushil Modi have also visited half a dozen districts and addressed people during the inauguration of different projects in the last two weeks and laid foundation stones and launched projects worth crores of rupees to send the political message that they were committed to Bihar`s development.

Chirag Paswan told party leaders and workers on Wednesday that the LJP`s role is "important in this rally" and asked every party worker to attend it.

The LJP`s Pasupati Kumar Paras, a Bihar Minister and younger brother of Ram Vilas Paswan, said that a big crowd at the Sanjalp Rally will vindicate the stand that the BJP-led NDA`s support base is intact and it would better itself in the 2019 Lok Sabha polls.

"NDA rally will send a clear and loud message that Modi will become PM again," he said.

According to the seat-sharing formula, the BJP and the JD-U will contest 17 seats each, while the remaining six seats will be given to the LJP.

In the 2014 Lok Sabha elections, the RJD won four seats and the Congress two. The JD-U, which contested separately, won two seats. The BJP-led NDA won 31 seats, with the BJP`s tally being 22. One seat went to the Nationalist Congress Party (NCP).