Asha Paswan staged a dharna at the office of Lok Janshakti Party. 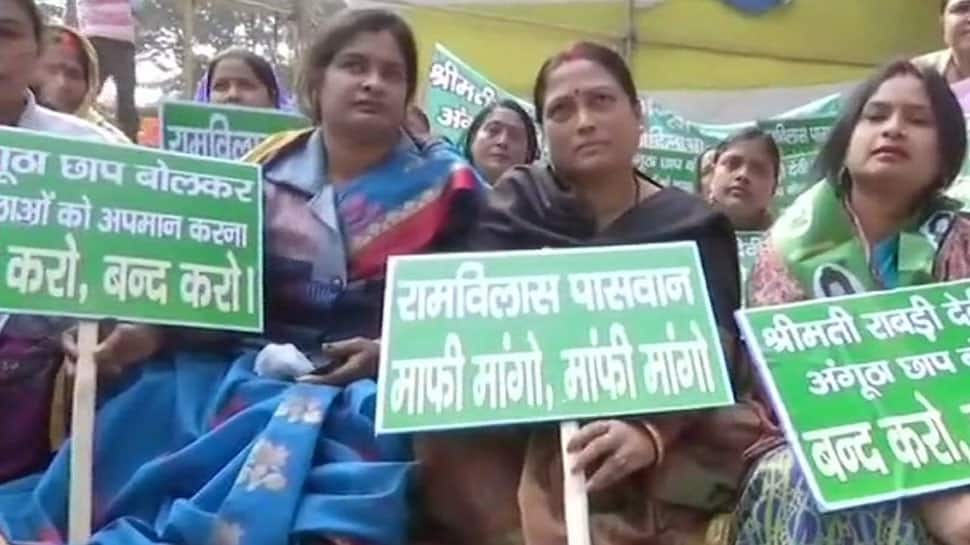 "I want him to take back his words and apologise. He should respect all women," Asha Paswan said.

Asha had on Saturday criticised her father for making a veiled attack on Rashtriya Janata Dal (RJD) leader Rabri Devi over the party's opposition to the Centre's quota bill and demanded an apology from him.

She also threatened to stage a dharna at the office of his Lok Janshakti Party (LJP).

Paswan, whose party will contest the upcoming general election along with JD(U) and BJP in Bihar, had addressed a press conference on Friday during which he had attacked the opposition RJD for opposing the NDA-led government's bill to provide 10 per cent reservation for the economically backward in general category.

"They (RJD) believe in merely raising slogans and making 'angootha chhap' (illiterate person) the chief minister," he had said, without naming anybody.

The remark was seen as a reference to the events of 1997 when RJD chief Lalu Prasad had to step down as Bihar chief minister as he faced arrest in the fodder scam cases and his wife, Rabri Devi, who has little formal education, was appointed as his successor.

She remained in office for eight years, longer than her husband, who was in power from 1990 to 1997.

"Papa has insulted Rabri Devi. My mother too was uneducated -- a reason why he abandoned her.

He must apologise or else I will stage a dharna in front of the LJP office," Asha said.

She is Paswan's daughter from his first marriage. Her husband, Arun Sadhu, had joined the RJD last year.

Paswan is separated from his first wife Raj Kumari Devi who lives alone at Samastipur district. He has anointed his son from his second marriage, Chirag Paswan, as his political successor and lives with his second wife Reena Paswan.

Bihar: 3 criminals killed in Begusarai after an encounter with police