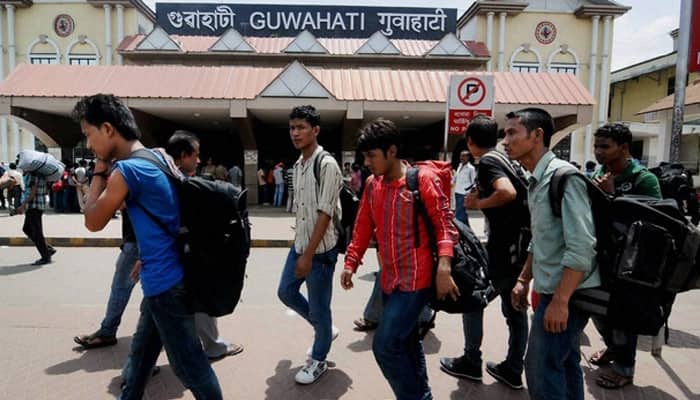 How often have we heard people from South India complain that they are tired of being referred to as Madrasis or for that matter as Mallus? Apart from really annoying our friends down South, what does this really mean?

Calling all South Indians as “Madrasis” basically casts all of them in a stereotypical garb where each one of them is a mundu-wearing, idli-eating, dark-looking and non-Hindi speaking race of people. So much so that the entire south of India, is reduced to a single state, where everyone speaks one language - South Indian.

Now why is it that an average north Indian can’t differentiate between Telegu or Malayalam, Tamil or Kannada? It may be true that even our neighbours down south don’t know everything about the rest of the Indian languages. But most of them will be easily able to identify Punjabi vs. Gujrati vs. Rajasthani. If that is the case, why is it so difficult to distinguish one south Indian language from another?

If South India is an example to go by, Northeast is actually far worse. At least no one is calling the South Indians foreigners in their own country. That is why, perhaps it is high time we start treating each of the seven sister states as separate identities rather than a stereotypical whole. This logic of differentiating than developing an identity works for a number of reasons. The most apparent reason being the fact that the people living in these seven states are not alike. They are a mix of different races, having different dialects, lifestyles and culture. There are more than 200 tribes living in the seven states, all of them colorfully and culturally rich communities having distinct traditions and practices. How can then there be a stereotypical person from the Northeast?

In terms of physical conditions too, the states are as varied as possible. Case in point, whenever I returned from a holiday back home, my colleagues asked me, “It must be quite cold back home?” But the fact remains that Guwahati, my hometown, can hardly be considered to have a cold climate. Or the whole of Assam for that matter. It has a sub-tropical Monsoon climate with high humidity that is any day closer to the climate of West Bengal or Delhi than to the climate of Sikkim.

Again, another common assumption people make about Guwahati is that it is a hilly place. But the truth is that most of Assam consists of plains with paddy fields with the only exception of a hill station being Halflong. Yes, you heard it right; the state of Assam has only one hill station just like Rajasthan has Mount Abu.

Another common assumption that has grown is about the food habits of the people. It so happens that momos happen to be one of my favourite snacks. Quickly that gets translated as being part of my native cuisine. People go to the extent of saying that I must bring them some mom-made momos. They don’t realize that people of Assam never ever make momos. They too have it from the Nepali vendors selling at the street. Momos are essential Tibetan and contrary to popular belief, it is not the staple diet nor a part of the local cuisine of people with epicanthic eyes that hail from the Northeast with the exception of Sikkimese and Ladakhi people who have momos as a part of their local ethnic cuisine.

The ignorance of people about the northeastern states is alarming to the extent of being obnoxious. Right from not knowing which town is in which state to what religions people practice to what they eat to what kind of places they live in. Take for example, this woman, who I overheard at the Delhi Trade Fair while appreciating an artifact at the Nagaland stall, said “Yeh sab cheezein na India mein nahi milta, Nagaland mein hi milta hai (These things are not found in India, they are found in Nagaland).”

People simply cannot accept the fact that my hometown is a city not a ‘gaon’ and I am never going to my ‘gaon’. Some others are concerned that I must have to undertake a really long arduous journey to reach home. They don’t understand the fact that the major towns of the Northeast are connected by air, leave alone the Indian Railways. Again for them, going to Gangtok or Guwahati is one and the same thing, so is going to Darjeeling!

One might argue that this is not true of the educated people who are well informed about such things. But the question is why not everyone? Unfortunately, our media has not been successful in portraying the correct picture in any of these aspects. More often than not, the national media has shown a very typecast representation of northeastern states.

What then is the best way to tackle this? To begin with the sobriquet “The Land of Seven Sisters” should be made redundant as soon as possible. Let’s start by first accepting the fact that each state has an identity of its own. Let each state and city be called by their name instead of putting them under a generalized category. Let’s stop saying this happens in the Northeast, that product is from the Northeast and that person is northeastern.

Proper representation in the national media will be possible only once we do away with the generalized view of the seven states. That itself will ingrain a better understanding of the region in people’s minds. And make Northeast truly come of age.

(Anindita Das is a guest writer. The views expressed here are her own.)