‘Hindi Medium’ is never weighed down by tedium. It breezes through a difficult satirical terrain with a nose for the sunnier side of everyday drudgery. 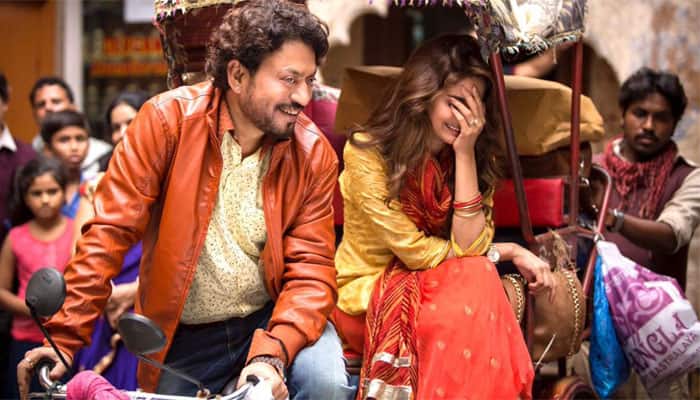 Irrfan Khan was last seen taking on corrupt forces in ‘Madaari’. He is back, this time to question the educational system in our country whereby children are inducted into posh English-medium schools only after a ridiculous amount of time, money and energy are invested into ensuring the child's future.

Irrfan + Social Issue, bound to work. He is known to be a thinking actor with very definite views of politics and culture.

The trauma that parents face is here alchemised into something smile-inducing and heart-warming, something quite magical in its ability to hit us where it hurts the most without damaging our sense of self-worth. Not that director Saket Choudhary trivialises the pain of parenting as it crosses the hurdles of schooling protocol.

Saket's earlier two films -- the delightful ‘Pyar Ke Side Effects’ and the equally delightful follow-up ‘Shaadi Ke Side Effects’ -- revealed a mature though not a self-conscious pamphleteering social commentator with his finger firmly on the pulse of contemporary issues. If Saket could make Mallika Sherawat remove her lingerie on screen without making us flinch, he could also get away with Vidya Balan trying to pass off her husband's child as her lover's just to get even.

To his credit, in ‘Hindi Medium’ director Saket Chowdhary does not allow proceedings to get preachy screechy or downright hysterical. Most issue-based films can't help lecturing down on the audience. Saket eases you into the life of a terribly endearing couple -- lovable with all their whims excesses and fancies -- played by Irrfan Khan and Saba Qamar. Together, Irrfan and Saba make the couple's journey through the amazing contradiction and anomalies of the schooling system look not only credible and real but also very engaging. The writing is sharp-witted and the verbal exchanges are topped with an extra layer of spice just to drive in the point.

Irrfan looks so married to Saba it is not funny. His sexual cravings and his ceaseless adoration of a wife who is often unreasonable, stubborn and manipulative, are remarkably subdued yet savage. The way he picks on her words to get his way in an argument, or inversely the way she manipulates his thoughts and words to her own advantage are lingering evidence of some slyly skilled writing that secretes wisdom about marital tricks that couples play on one another -- not to betray or cheat on the spouse but just to keep the spirits high in marriage.

And watch out for the grossly underused monstrously talented Deepak Dobriyal. His turn as an economically challenged but forever cheerful parent would make the most frosty heart melt.

Ditto the film. ‘Hindi Medium’ is never weighed down by tedium. It breezes through a difficult satirical terrain with a nose for the sunnier side of everyday drudgery.

It would be unfair to reveal more in this astutely woven yarn on the adventures of a rather wise child's parents in gyan-dom. Suffice it to say, director Saket Choudhary is all through on firm ground as he negotiates his way through the contradictory pulls and pushes of an education system that fosters duplicity and encourages complicity with corrupt elements.

The incidents and anecdotes fill up the spaces not just in the narrative but also in the audiences' hearts.

While Irrfan is in fine fettle, making light of and shining bright on what is essentially a very serious social issue,and displaying comic timing that Govinda would envy (if only he was around to envy anyone), Saba Qamar succeeds in being her very accomplished co-star's support system without sweating it out in the dramatic scenes. But her presence is not as bankable as one expected. Nonetheless, she holds her place in front of the bang-on Khan. And that's saying a lot.

Among the female actors, it's the neglected Tillotama Shome who shines as a school-admission counsellor. Her attitude of superciliousness towards the couple from Chandni Chowk, who have migrated to Vasant Vihar to seem elitist, is deliciously vituperative. But Amrita Singh as an evil school principal hyperventilates through a sketchy role.

Also, while we are on the female characters, why is the actress Swati Das playing Deepak Dobriyal's wife pasted with black polish? Isn't this stereotyping of the poor as dark-skinned out of character in a film that successfully demolishes many sacred cows and wholeheartedly questions the imbalances in our social and educational system with a hefty dose of humanism and humour?

Hindi Medium is a well-told parable of middle-class aspirations, scattered with moments that every parents would recognize with a combination of pleasure and dread. It is a solid weekend entertainer with a message for every parent who has ever suffered the traumatic jitters of preparing to get a child admitted into school.

‘Hindi Medium’ has balls and long legs. Should go a long way.