Spotify has released ‘Most Streamed K-Pop Soloist of 2022’ in which BTS JungKook grabbed the top spot. However, Spotify later gave the title to another K-Pop star Lisa.

New Delhi: K-pop singer Lisa’s supporters across the world have gone furious over Spotify’s blunder and demanded from the company to make an official apology to the Korean star. For that purpose, they have started the trend on Twitter ‘Apologize to Lisa’ globally as the k-pop star has to face a lot of vile, misogynist and abusive comments on the Internet because of the company's blunder.

Spotify has released ‘Most Streamed K-Pop Soloist of 2022’ in which BTS JungKook grabbed the top spot. Several fans were ok with that because K-Pop sensation Jungkook had done wonderful solo projects this year including the FIFA World Cup song Dreamers.

It is to be noted that Spotify releases this kind of lists every year to track the trends of the certain year. However, Spotify rectified its mistake for merging multiple genre tags to lead slightly different top ten lists by tweeting on the official Spotify K-Pop Twitter handle. 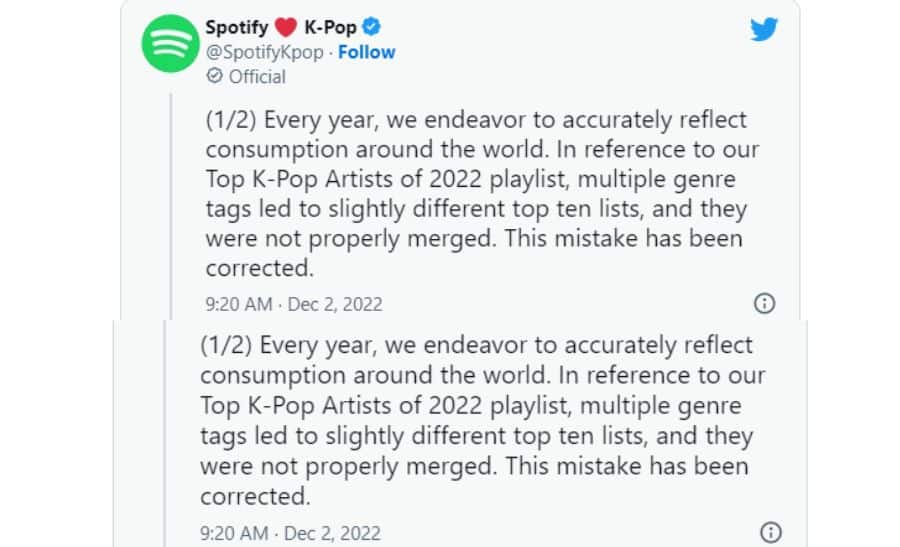 Netizens spew vile comments on her

After the backtracked of Spotify, netizens started spewing vile, misogynist, and abusive comments on her.

It's not the potential of human creativity you unlocked this time @Spotify @SpotifyKpop @SpotifyKR @jeremyerlich @eldsjal but harrassment towards women caused by your "mistake" particularly Lisa. You can change your rules overnight, how hard it is to apologize?

Soon ‘Apologise to Lisa’ begin trending on Twitter with supporters demanding a formal apology from Spotify. She has to face harassing, abusive and misogynist comments because of Spotify’s blunder. Hence, the company must make a formal apology.

Your mistake caused LISA to be a subject of ridicule and women objectification and your silence gives consent to cyberbullies and slutshamers to further continue their heinous acts!

If it was your plotted plan to get this much attention from both fandoms, fine. You got it. Now....

Your “mistake” caused a woman to be racially attacked by the fandom you’re celebrating with. You could’ve been fair by acknowledging both parties you’ve wronged!