Pakistan on Saturday strolled to a nine-wicket win over Bangladesh in the 2nd T20I between the two sides at the Gaddafi Stadium in Lahore. 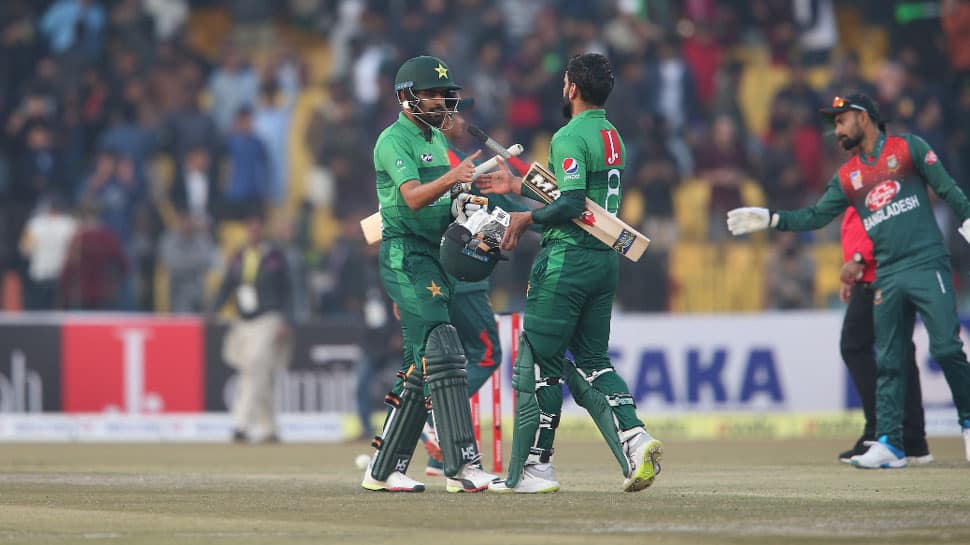 Lahore: Pakistan on Saturday strolled to a nine-wicket win over Bangladesh in the 2nd T20I between the two sides at the Gaddafi Stadium in Lahore.

Captain Babar Azam and Mohammad Hafeez set up an unbeaten 131-run stand for the second wicket to lead the hosts to victory. Pakistan have taken a 2-0 lead and thus sealed a series win.

Bangladesh were restricted to 136/6 on a slow pitch in Lahore. The visitors made an early inroad with Shafiul Islam dismissing Bangladesh opener Ahsan Ali for a duck in the second over of the Pakistan innings.

But Hafeez and Babar then played a nearly chanceless innings to take their team to victory. Babar was unbeaten on 66 while Hafeez, who scored the winning run, made 67.

Bangladesh put up another woeful performance batting first. While opener Tamim Iqbal held fort at one end, he hardly found any partners as his opening partner Mohammad Naim, Mahedi Hasan and Liton Das were all dismissed in single digits while eating up a number of deliveries.

Bangladesh were yet to reach a three-digit score even in the 15th over. Tamim managed a 45-run partnership with Afif Hossain for the fifth wicket and a 31-run stand with Mahmudullah for the sixth before being dismissed for 65. The third T20I will be played in Lahore on Monday.

Don't reverse sweep into your face: Jimmy Neesham's advice after hurting his chin