'Bradman of T20', Twitterverse feels this was the last time Chris Gayle batted in T20Is for Windies

Chris Gayle walked back to the dressing room after scoring 15 off 9 balls against Australia in Match 38 of the Super 12. The innings included two big sixes. 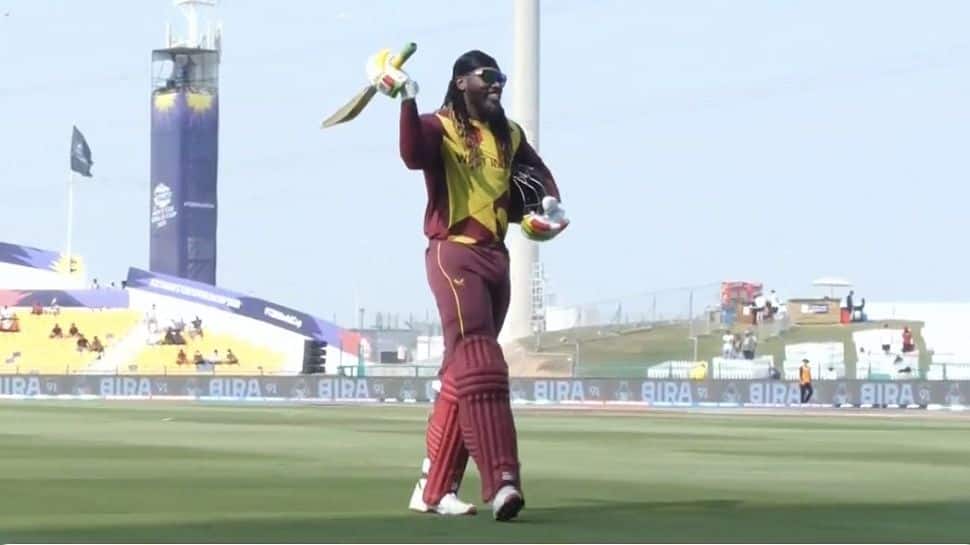 Chris Gayle walked back to the dressing room after scoring 15 off 9 balls against Australia in Match 38 of the Super 12. The innings included two big sixes.

When he arrived and started playing his shots, it appeared as if Gayle is going to score big in this match, which is supposed to be his last in West Indian colours in this format.

But when Cummins crashed into his stumps, the innings was cut short and Gayle, wearing sunglassesh while batting, started walking back as he did that one wondered whether that was the last time the world has seen the Universe Boss walking back in T20Is.

As Gayle neared the ropes, he turned back and showed his bat all around to the fans and this was a gesture that said a lot of things. That it could well be the last time Gayle batted for West Indies.

Gayle has scored over 14,000 runs in T20s while playing for his country as well various franchises all around the world.

As soon as Gayle walked back, Twitter started thanking the batting legend for entertaining the audiences for such a long time.

Very few players have had more impact on T20 than Chris Gayle, the Bradman of T20.

Has scored 22 centuries; the next best is 8.

Thanks Chris Gayle for all the memories & nightmares you have given us.

If this is the last time we see Chris Gayle, DJ Bravo, Lendl Simmons & Ravi Rampaul in the Maroon.

We say thank you for the memories.

Most centuries in T20 cricket:

That could be the last time we see Chris Gayle bat for the West Indies. One of the all time greats in all formats, but THE GREATEST T20 player of all time.

Thank you for all the entertainment you superstar Henry Gayle. Absolute rockstar of the format who took it to another level.