The incident was first brought to light by Mohammed Siraj during the Sydney Test, when team leader Ajinkya Rahane along with other senior players reported to the umpire about racial remarks being passed at him and his bowling partner Jasprit Bumrah. 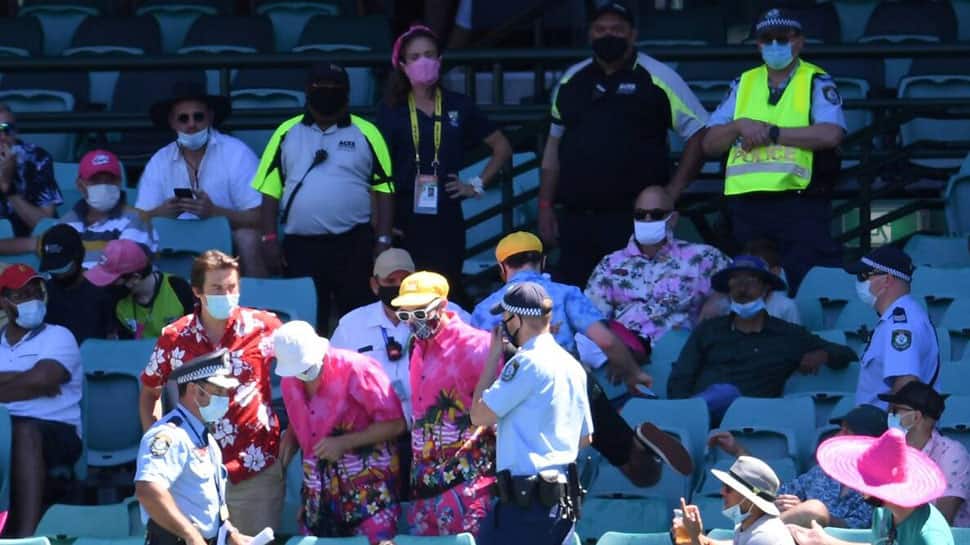 Police remove a group of spectators from their seats after Mohammed Siraj complained to umpires of being racially abused during Sydney Test. (Reuters)
Share:
Written By:

New Delhi: In a fresh development on Wednesday, Cricket Australia (CA) confirmed that members of the Indian contingent were subjected to racial remarks and the investigation is still underway.

The cricket board released an official statement in this regard, which read: "CA confirms that members of the Indian cricket team were subjected to racial abuse," Sean Carroll, CA's Head of Integrity and Security, said. "CA's own investigation into the matter remains open, with CCTV footage, ticketing data and interviews with spectators still being analysed in an attempt to locate those responsible. Spectators who are found to have breached CA's Anti-Harassment Code face lengthy bans, further sanctions and referral to NSW Police."

The incident was first brought to light by Mohammed Siraj during the Sydney Test, when team leader Ajinkya Rahane along with other senior players reported to the umpire about racial remarks being passed at him and his bowling partner Jasprit Bumrah.

Despite lodging an official complaint with the ICC, Siraj was once again at the receiving end from a section of the fans and subsequently six spectators were escorted out by the security officials present at the Sydney Cricket Ground.

READ | 'Go back to where you belong': After Siraj, Indian-origin fan reports racial abuse at SCG

Discussing the incident at length, Rahane after the series revealed that the umpires had then offered the Indian team to walk off the field, but he chose to continue with the game.

CA in their statement further clarified that the six people, who were removed by the security officials, did not engage in racial behaviour, and the cricket body is still on the lookout for the real culprits.

"CA's investigation concluded that the spectators filmed and/or photographed by the media in the Brewongle Stand concourse at the conclusion of the 86th over on day three of the Test did not engage in racist behaviour. CA is awaiting confirmation from NSW Police that it has completed its investigation into the matter and will not offer further comment until it is received."

"As stated at the time of the incident, CA has a zero-tolerance policy towards discriminatory behaviour in all forms and, as hosts of the Border-Gavaskar series, apologises to the Indian men's cricket team," Carroll added.