I was not aware of my age when I appeared in U-14 trials: Shahid Afridi

Afridi, known for his power-hitting, has revealed that he was actually 19 years old (21, going by his autobiography 'Game Changer') when he produced a 37-ball 100 in Nairobi in 1996-97 and not 16 as has been recorded officially. 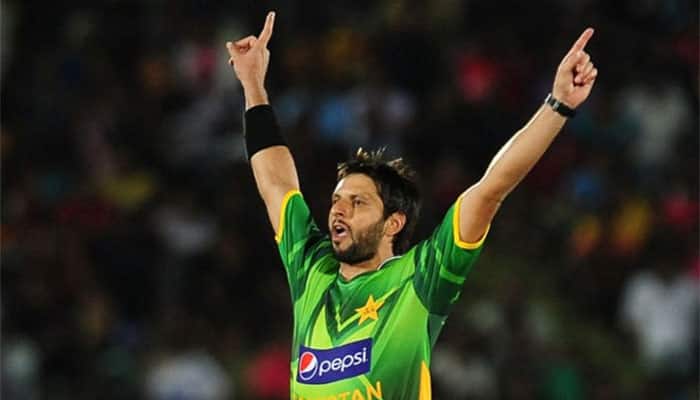 Former Pakistan captain Shahid Afridi claimed that he was unaware of his real age when he appeared for national under-14 trials and it led to all the "mess" and "misunderstanding" on the issue.

Afridi, known for his power-hitting, has revealed that he was actually 19 years old (21, going by his autobiography 'Game Changer') when he produced a 37-ball 100 in Nairobi in 1996-97 and not 16 as has been recorded officially.

Afridi said he has no regrets of talking about his age in his just-released autobiography and also clarified that the first edition carried the wrong year of his birth.

"The reason for my age being messed up in the records is that when I first appeared for the under-14 trials I myself really did not know my exact age. So when the selectors asked me about my age and details I said what others told me to do. That age was officially recorded in the cricket board records and thus the misunderstanding," Afridi told a Pakistani TV channel.

"I have no regrets because the record for scoring the fastest one-day hundred was mine since 1996 regardless of what my age was recorded," he said on the channel.

The former skipper, whose book has caused quite a stir, said he was born in a village in Mardan where there was no practice of recording date of birth or having an official birth certificate.

"When my family moved to Karachi, I just knew the date and month of my birth and not the exact year that is why my age was erroneously recorded in the under-14 trials."

Afridi made it clear that he had clarified the year of his birth as 1977 and not 1975 as published in his book.

"It was a mistake by the publishers and copy editors. In the second edition of the book, the correction has been made," he said.

He also admitted some factual errors had appeared in the book which would be corrected in the second edition.

He also spoke about the comments he made about Indian batsman, Gautam Gambhir in the book that led to a war of words between them on Twitter.

"I just want to say when we had that fight in the match it was a mistake by both of us. We realised that later. I have nothing personal against Gambhir. In fact, I have some good friends in the Indian team and I get along with them well off the field. Even if I meet Gambhir somewhere, I will greet him normally as I have nothing in my heart against him."

Afridi made it clear he had enjoyed the most playing his cricket in India.

"I have enjoyed each and every tour of India because of the love and affection I and other Pakistani players have got always there. I admire Indian cricket because of the way the sport is run there and how the money they earn is invested back into the game and players."

"I still believe that cricket is one way to reduce tensions between the two countries and we should have regular bilateral matches. Because when we tour each other's countries there will be more people to people contact and misunderstandings will be lessened."

He recalled how in 2004 when the Indian team toured Pakistan, Pakistani people had shown respect, love and hospitality to all the Indian players, officials, people and government dignitaries who came to watch the matches.

"It was a fantastic atmosphere and I believe we must do it again. Pakistan and Indian people love their players and want to see bilateral matches."

He also made it clear that Sachin Tendulkar, Virat Kohli, Mahendra Singh Dhoni were among his favourite players but he could include only Kohli in his all-time World Cup team because he could only pick 12 players.

"Sachin and Dhoni are greats and they have achieved a lot for Indian cricket. I picked Kohli because he just looks so majestic and beautiful to watch while batting."

He also clarified his comments about some Pakistani former greats in his book.

"There is no doubt in my mind that I have a lot of respect for Javed (Miandad) Bhai, Waqar Younis and others always. The incidents I have narrated in my book is about what happened on and off. But it does not mean I don't respect them or try to belittle their achievements for Pakistan cricket. Overall, I always respected my seniors and it remains that way," he said.