The International Cricket Council (ICC) on Tuesday unveiled the fixtures for both men's and women's T20 World Cup 2020, which is scheduled to be held in Australia. 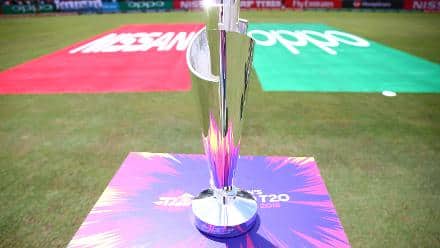 The International Cricket Council (ICC) on Tuesday unveiled the fixtures for both men's and women's T20 World Cup 2020, which is scheduled to be held in Australia.

The Indian women's cricket team will take on hosts and defending champions Australia on February 21 at the Sydney Showground Stadium in the clash which will mark the opening of women’s showpiece tournament.

Meanwhile, Virat Kohli and his men will begin their campaign much later on October 24, 2020 against South Africa at the new Optus Stadium in Perth.

Hosts Australia will play the opening match of the Super 12 stage of the men's tournament on the same day under lights at the SCG in a blockbuster match-up against the world’s top-ranked team, Pakistan.

India have been drawn alongside Australia, New Zealand,  Sri Lanka and Qualifier 1 for the women's tournament. Pakistan, England, West Indies, South Africa and Qualifier 2 make up the second group, i.e, Group B.

The Men in Blue, meanwhile, are placed alongside England, Afghanistan, Qualifiers 3 and 4 while their arch-rivals Pakistan, Australia, West Indies, New Zealand and Qualifiers 1 and 2 have been drawn in Group A.

Notably, it is for the first time that the women’s and men’s T20 World Cups will be held as standalone events in the same year and in the same country.

Both tournaments will be held right across Australia in eight host cities and 13 venues.