Both have been central figures in Afghanistan’s ascension; from playing in World Cricket League Division Five in 2008 to contesting their second ICC Men’s Cricket World Cup. 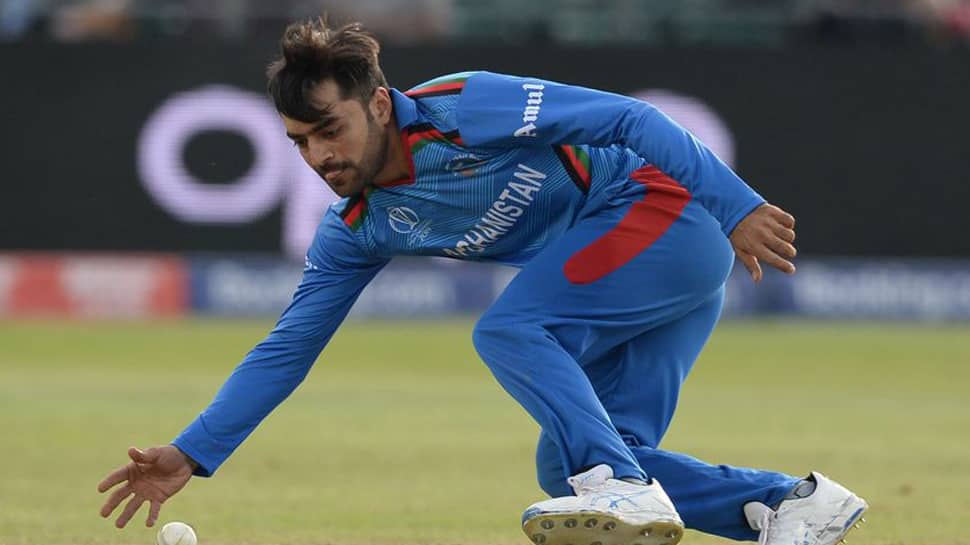 With Rashid Khan and Mohammad Nabi in their team, Afghanistan always have a chance. The spin duo are ranked second and third in the world ODI all-rounder standings and often shoulder the weight of a nation’s hopes every time they go into battle for their side.

Both have been central figures in Afghanistan’s ascension; from playing in World Cricket League Division Five in 2008 to contesting their second ICC Men’s Cricket World Cup.

And their significance to their country was underlined emphatically against Sri Lanka after their intervention in Cardiff prompted yet another batting collapse from their opponents.

Just three days after surrendering to 136 all out against New Zealand, Sri Lanka appeared to have put their batting woes behind them as they coasted to 144/1 after 21 overs.

Afghanistan’s fielding during that period had left a lot to be desired, with no balls, overthrows and missed run-out opportunities allowing Sri Lanka to ease any nerves they may have felt.

Enter Rashid and Nabi. The latter had already taken one scalp - capturing the key wicket of Sri Lanka captain Dimuth Karunaratne in the 14th over - before turning the match on its head.

The experienced campaigner returned in the 22nd over and wreaked havoc with his off spin as Lahiru Thirimanne became his second victim after dragging a slow ball onto his stumps.

It kick-started an astonishing spell in the game, which saw Sri Lanka lose seven wickets for 36 runs in the space of 11 overs before the rain brought an untimely halt to proceedings.

Having taken Thirimanne’s wicket with his second ball of the over, Nabi tempted Kusal Mendis forward two deliveries later with a looped effort and saw him caught at first slip.

Nabi was now in his element and capped off a sensational over with his and Afghanistan’s fourth wicket of the day, with Angelo Mathews suffering his second consecutive duck.

With the floodgates now well and truly open, Afghanistan went for the kill and Hamid Hassan joined the party in the next over by taking the wicket of the scoreless Dhananjaya de Silva.

Sri Lanka’s frailties were now clear for all to see and Thisara Perera’s run out in the 26th over piled on more pressure as Nabi continued to frustrate the batsmen with his deceptive flight.

To this point, Rashid had only played a support act. His first three overs had not produced any wickets, but the talented 20-year-old had also only conceded 11 runs.

Only two runs came from his next two overs, which saw him confound the opposition with his bag of tricks, as Afghanistan cranked up the pressure on Sri Lanka’s batsmen.

It paid off when Isuru Udana gave away his wicket to Dawlat Zadran in the next over, before Rashid returned to take the wicket he deserved as the rain began to fall.

Kusal Perera had been Sri Lanka’s best batsman but an attempted reverse sweep backfired and he gloved the ball into the grateful hands of Mohammad Shahzad for 78.

With Sri Lanka on the cusp of being bowled out, the weather came to their rescue and gave them a stay of execution, with the score at 182/8 as the two teams took an early lunch.

Unfortunately for Sri Lanka, they were forced to bat another eight overs on their return to the crease after the rain subsided and the game was adjusted to 41-overs per side.

And they were unable to bat out their overs as Dawlat took his second wicket of the afternoon before Rashid bowled Nuwan Pradeep with a snorter of a delivery to end the innings.

Rashid finished with 2-17 from 7.5 overs alongside Nabi’s figures of 4-30, but their efforts proved to be in vain as Afghanistan fell short of their revised target of 187 under DSL.

Ultimately, Afghanistan’s performance in Cardiff was emblematic of their current situation. Their batting in the one-day game remains a weakness that is costing them all-too frequently.

But in Nabi and Rashid they possess genuine match-winning bowlers. Their heroics with the ball even masked over the fact that Sri Lanka’s second top-scorer was extras with 35 runs.

This was a game they would have been targeting for a potential victory, though. Now, Afghanistan must regroup and find a way to back up their bowling superstars.