ICC World Cup 2019: From revised prize money to past winners, everything you need to know

This will be the highest prize money to be given till date to the winning team, along with the World Cup trophy.

The winning team in the upcoming ICC Cricket World Cup 2019 will earn prize money of $ 4 million (Rs 28 crore), said a statement released on Friday by the International Cricket Council (ICC).

This will be the highest prize money to be given till date to the winning team, along with the World Cup trophy.

There are prizes for each league match won in the 10-team tournament, in what promises to be a competitive tournament with the world’s best playing each other in a round-robin format. 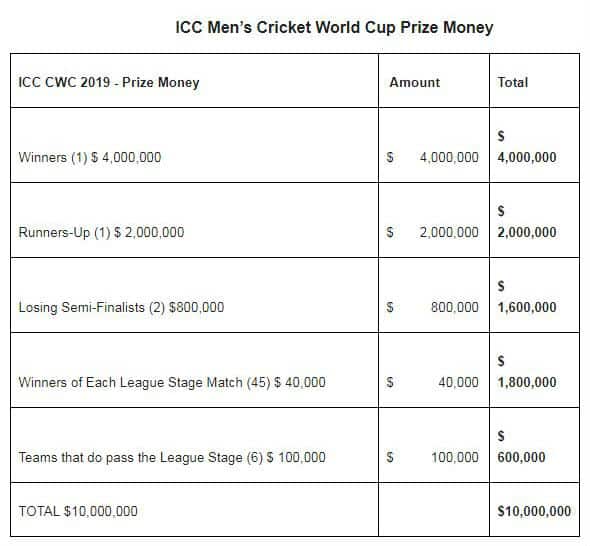 Meanwhile, here are a few points you need to know about the ICC Cricket World Cup 2019:

-  The tournament will run from May 30 to July 14. The semi-finals will be played at Old Trafford in Manchester and Edgbaston in Birmingham on July 9 and 11, respectively, while Lord’s will host the finals on July 14.

- 11 venues across England and Wales will be used for the tournament.

- The 10 teams in the tournament will play against each other in a single-league format, with the top four sides after 45 matches to qualify for the two semi-finals

- Australia is the most successful team in the World Cup, followed by West Indies.