India will next take on Afghanistan on June 22 while Pakistan will lock horns with South Africa in their next ICC World Cup 2019 clash a day later. 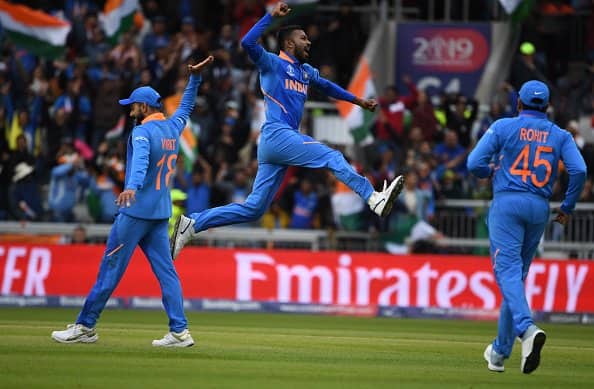 Rohit Sharma struck a scorching knock of 140 runs before bowlers came to the fore to help India thrash Pakistan by 89 runs via Duckworth-Lewis Method (D/L) in a rain-hit clash of the 2019 International Cricket Council (ICC) World Cup at the Old Trafford Cricket Ground in Manchester on Sunday.

Put in to bat first, Sharma not only smashed his 24th ODI ton as well as third World Cup century but also notched up good partnerships of 136 and 98 runs with opening partner KL Rahul (57) and Indian skipper Virat Kohli, respectively to help the Men in Blue put up a formidable total of 336 for five in their stipulated 50 overs.

For Pakistan, Mohammad Amir was the pick of the bowlers as he bagged three wickets while giving away just 47 runs.

Chasing a revised target of 302 runs after rain played the spoilsport and reduced the match to 40 overs per side, Vijay Shankar, Hardik Pandya and Kuldeep Yadav all bagged two wickets each to restrict Pakistan to 212 for six in 40 overs. Fakhar Zaman (62), Babar Azam (48) and Imad Wasim (46) were some of the notable contributors for Pakistan.

# Indian opener Rohit Sharma struck a blistering century of 140 runs off 113 balls. It was his 24th ODI ton and a second century of this year’s World Cup.

# Sharma's 140-run knock was also his third World Cup century, thus he has joined his opening partner Shikhar Dhawan in the list of the Indian batsmen with the most number of centuries in the tournament. Legendary cricketer Sachin Tendulkar holds the world record with six World Cup tons, while Sourav Ganguly is sitting at the second spot with four centuries to his name in the mega event.

# Sharma and his opening partner KL Rahul (57) also stitched a huge 136-run stand for the first wicket. By doing so, the duo became the first Indian pair to stitch a 100-plus opening stand against Pakistan in a World Cup match.

# En route to his knock, Sharma also smashed 14 boundaries and three sixes. As a result, he also broke Mahendra Singh Dhoni's record of most sixes by an Indian in ODIs. Sharma has smashed 356 sixes, surpassing Dhoni's record of 355 sixes.

# Virat Kohli broke legendary cricketer Sachin Tendulkar's world record to become the fastest player in the history of the game to reach 11,000 run-mark in One Day Internationals (ODIs). The Indian skipper, who was just 57 runs short of the milestone heading into the high-octane match, took just 56 balls to reach the feat. He took 222 innings to achieve the milestone while Tendulkar reached the mark in his 276th innings.

# Vijay Shankar was asked to complete the fifth over after Bhuvneshwar Kumar walked off the field with a hamstring injury. Interestingly, Shankar bagged his maiden wicket of the World Cup by removing Imam-ul-Haq for seven on his debut in the mega event.

# By removing Imam-ul-Haq, Shankar also became only the fourth bowler to bag a wicket off a very first ball in the history of the World Cup. Prior to him, only Malachi Jones of Bermuda, Ian Harvey of Australia and Mohammad Yousuf of Pakistan had struck off their very first ball in a World Cup match.

# The win saw India improve their head-to-head record against Pakistan to 7-0 in the World Cup.

India will next take on Afghanistan on June 22 while Pakistan will lock horns with South Africa in their next ICC World Cup 2019 clash a day later.