ICC World Cup 2019: Trial by pace as India face off against Australia at The Oval

Sunday’s game at Kennington Oval is a cracker, whichever way you view it, as second-ranked India take on a resurgent Australia. 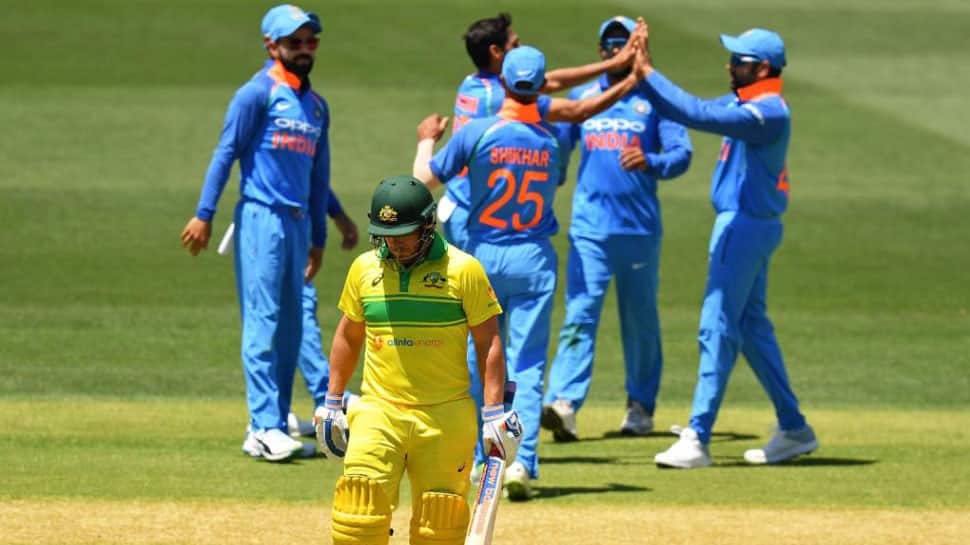 LONDON: Aaron Finch, the captain of defending champions Australia, feels that this match could be influenced by the fast bowlers on either side. He also feels that Australia’s 3-2 ODI series win in India earlier this year, which came after his team was down 0-2, has given the side added impetus as they chase a hat-trick of wins in the ICC Cricket World Cup 2019.

Rohit Sharma, a batsman who averages 61.87 against Australia in ODIs, and who is coming off a match-winning unbeaten century to steer India to victory in their first game of the tournament – an innings his skipper Virat Kohli termed the best of his career – does not quite think that what happened in February-March at home will have any bearing on game 14 of the World Cup.

And despite having such a superb record against Australia, Rohit doesn’t feel he has any noticeable advantage over India’s opponents.

Sunday’s game at Kennington Oval is a cracker, whichever way you view it, as second-ranked India take on a resurgent Australia. India didn’t need to hit third gear as they beat South Africa by six wickets. Australia dispatched Afghanistan with ease and then overcame a scare against West Indies, with Nathan Coulter-Nile scoring 92 and Mitchell Starc grabbing five wickets.

Both teams possess quality pace attacks, with Starc and Pat Cummins on one side and Jasprit Bumrah and Bhuvneshwar Kumar on the other. On a rather dry Kennington Oval surface, expect both teams to not hold pack on bowling fast and short.

What: India vs Australia

Weather: Mostly sunny with a high of 18 degrees Celsius

The Indian team trained without any hiccups, under mostly clear skies with a slight wind. No signs of any injury concerns. Shikhar Dhawan, KL Rahul and Kedar Jadhav began batting while Ravi Shastri and MS Dhoni looked on in conversation for about 15 minutes.

No changes are expected to the Indian team.

Australia’s nets session on Saturday morning was not without incident. Warner hit a nets bowler on the head with a firmly-hit drive and felled the Indian-origin youngster. The bowler, Jaykishan Plaha, was stretchered off the field and taken to the Oval’s medical room where he remained conscious.

Australia’s practice session resumed and all the main batsmen had a good hit, while the bowlers went through their paces. Ricky Ponting was seen in conversation with Marcus Stoinis, the allrounder who has struggled for runs in the practice matches against New Zealand in Australia, the team’s two World Cup warm-ups in England and made 19 against West Indies. Stoinis is expected to keep his place.

Australia are not expected to make any changes, even though Coulter-Nile has gone wicketless in the World Cup.

Two of the three games played here during the World Cup have seen the team batting first cross 300. The other one was between New Zealand and Bangladesh, where Kane Williamson’s side squeezed home by two wickets.

The surface for Sunday’s match wears a worn look, with a very slight grass covering. Expect runs, as well as a bit of grip for the spinners.

Rohit has scored seven ODI centuries against Australia, and has a strike-rate of 94.51 against them.

Against Australia at Kennington Oval, India have played just one ODI. That was during the 1999 World Cup when Mohammad Azharuddin’s team lost to the eventual winners by 77 runs.

Australia’s ODI record at this ground is eight wins, six losses and one no-result.

“Obviously both sides have had a bit of success with their spinners in the past couple of months in particular, so what it comes down to is execution. I think on a pretty good Oval surface that’s going to be another used wicket, so the second time in three games that we’ve played on a used surface, it’s going to come down to who executes. It’s as simple as that.” – Aaron Finch

ICC World Cup 2019, Afghanistan vs New Zealand: As it happened