Indian spin duo of Ravinchandran Ashwin and Ravindra Jadeja help the hosts reduce South Africa to 39 for three at stumps on the second day of the first Test at ACA-VDCA Cricket Stadium in Visakhapatnam on Thursday. 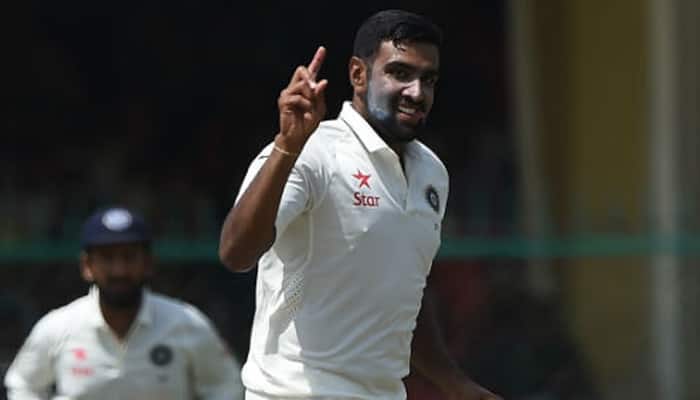 After Mayank Agarwal smashed his maiden Test double hundred while Rohit Sharma well-supported him with 176-run knock to guide India to a mammoth first innings total of 502/7 declared, the Indian spin duo of Ravinchandran Ashwin and Ravindra Jadeja help the hosts reduce South Africa to 39 for three at stumps on the second day of the first Test at ACA-VDCA Cricket Stadium in Visakhapatnam on Thursday.

# WICKET! South Africa have now lost their third wicket as Piedt was bowled out for a duck by Jadeja on the third delivery of the 18th over. South Africa 34/3 (18 overs)

# Dane Piedt is the new batsman in!

# WICKET! Ashwin strikes again. De Bruyn, who was looking to stitch a stand with Elgar after Markram's dismissal, was caught behind the wicket by Saha on the third delivery of the 17th over. South Africa 31/2 (17 overs)

# India have conceded just a single to Elgar (19) in the last four overs. South Africa are currently trailing India by 474 runs in the first innings. South Africa 28/1 (15 overs)

# 13 runs off the last five overs, including a boundary and a six from the South African batsmen. Theunis de Bruyn (4) and Dean Elgar (18) are currently playing at the crease and are looking to stitch a stand after Markram's early dismisal. South Africa 27/1 (11 overs)

# WICKET! Ravichandran Ashwin gave an early breakthrough to India by bowling out Aiden Markram for five on the first delivery of the eighth over. South Africa 14/1 (7.1 overs)

# Ravichandran Ashwin and Ravindra Jadeja remained unbeaten at their respective scores of one and 30 as India declare their first innings at 502/7.

# Ravichandran Ashwin is the new batsman!

# WICKET! Hanuma Vihari (10) departed cheaply after being caught at long-on by Dean Elgar on the fourth delivery of the 127th over by Keshav Maharaj. India 457/6 (128 overs)

# Hanuma Vihari is the new batsman in!

# WICKET!! Soon after Rahane went back to the pavilion, Agarwal (215) smashed the fourth delivery of the 120th over by Dean Elgar straight towards deep midwicket, only to see Dane Piedt take a catch. India 436/5 (120 overs)

# WICKET! Rahane falls for 15. The Indian batsman drove the sixth ball of the 118th over towards cover, only to hand a simple catch to Temba Bavuma. India 431/4 (118 overs)

# Mayank Agarwal has brought up his maiden Test double century. Agarwal drove the first delivery of the 116th over firmly down towards long off to notch up two runs and reach the mark. India 419/3 (116 overs)

# 13 runs off the last five overs. Agarwal continues to stand strong at the crease and is approaching his Test double century, while Rahane is currently batting at seven. The hosts are approaching 400-run mark. India 394/3 (109 overs)

# WICKET!! Senuran Muthusamy bags his first Test wicket and that too of Virat Kohli. The Indian skipper handed a return catch to Muthusamy on the first delivery of the 104th over. India 381/3 (104 overs)

# India have added another 15 runs off the last five overs. Mayank Agarwal continues to stand strong at the crease and has crossed a 150-run mark while Kohli is currently batting at 15. India 353/2 (98 overs)

# 14 runs off the last five overs. Kohli got off the mark by hitting the first delivery of the 91st over between bowler and mid off for a boundary. India 338/2 (93 overs)

# Indian skipper Virat Kohli comes to bat at No.5!

# WICKET! Cheteshwar Pujara (six) was bowled out by Vernon Philander with a perfect outswinger on the first delivery of the 88th over. India 324/2 (88 overs)

# South Africa bowled a good last five overs, delivering three maidens and conceding just seven runs. Pujara got off the mark by hitting the first delivery of the 84th over between the gap between cover and silly mid off for a boundary. India 324/1 (87 overs)

# WICKET!! South Africa have finally got the breakthrough as Rohit Sharma fell short of a double century and departed for 176. Soon after bringing up 300-run stand with Agarwal (137), Sharma was caught behind wicket by Quinton de Kock on the last delivery of the 82nd over by Maharaj. India 317/1 (82 overs)

# Rohit Sharma smashed a 150-run knock as the hosts continue to pile up runs on the scoreboard. India have added 35 runs in the last four overs, including six boundaries and a six. South Africa, on the other hand, are desperately looking for a breakthrough.India 299/0 (79 overs)

# Agarwal (108) and Sharma (148) continue to remain strong at the crease to help India cross the 250-run mark in their first innings. South African boler Keshav Maharaj was smashed by Sharma for two back-to-back boundaries on the fifth and sixth deliveries of the 73rd over. India 259/0 (73 overs)

# CENTURY!! Agarwal continued his good form with the bat on the second day of the opening South Africa match as he brought up his maiden Test century off 204 balls. He reached the mark by pushing the second delivery of the 69th over to short third man's left for a single. India 239/0 (68.2 overs)

# The hosts have added seven runs off the last two overs. Agarwal smashed the first delivery of the 62nd over past gully for a boundary. Sharma is currently batting at 120, while Agarwal is approaching a Test century. India 214/0 (63 overs)

# Four runs off the over. Philander bowled a length ball onto Sharma's pads on the third ball and the Indian opener tickled it fine for four runs. India 206/0 (60 overs)

# Agarwal and Sharma have walked down the crease to resume India's first innings. Philander to open the attack for South Africa on Day 2.

The weather looks good today and we have started on time.

Big Vern will get proceedings underway for the #ProteaFire

# After rain forced an early stumps on Day 1, the play will begin 10 minutes early today while the second session will be extended by 20 minutes in order to make up for the time lost. A total of 98 overs will be bowled today.

How much more can the Indian batsmen post on the board? Will #TeamIndia bowlers come into play later in the day? Lots to look forward on Day 2 in Vizag #INDvSA @Paytm pic.twitter.com/ZVvVYTXdgL

Sharma smashed a blistering unbeaten knock of 115 runs while Agarwal well-supported him with an unbeaten 84-run knock as India reached 202/0 before rain played the spoilsport and forced an early stumps on the opening day of the first Test against South Africa on Wednesday.

After winning the toss and opting to bat first, India made a perfect start to their first innings as Sharma and Agarwal shone with the bat and shared a 200-plus partnership to put their side in a commanding position at the end of Day 1.

Sharma,who fell for a duck during the practice game for Board President’s XI against South Africa, had a dream debut in his first Test as the opener as he first pulled back his 11th Test half-century before notching up his fourth hundred in the longest format of the game off 154 balls.

Sharma also became the first player from the country to score a century in all three formats of the game as an opener.

India  are looking to begin their home leg of the ICC World Test Championship on a promising note when they lock horns with South Africa in the opening Test. The Virat Kohli are currently standing at the top of the World Test Championship points table with 120 points after clinching the two-match series against West Indies 2-0 last month.

Meanwhile, South Africa—who will be playing their first match since the retirement of Dale Steyn and Hashim Amla—are eyeing to kick start their Test Championship campaign on a winning note.

India had sealed the four-match Test series 3-0 when South Africa had last toured the country in 2015.