India vs West Indies, 1st T20I: As it Happened

India won the toss and opted to bowl first in the opening T20I of the three-match series against West Indies at the Rajiv Gandhi International Stadium in Hyderabad on Friday. 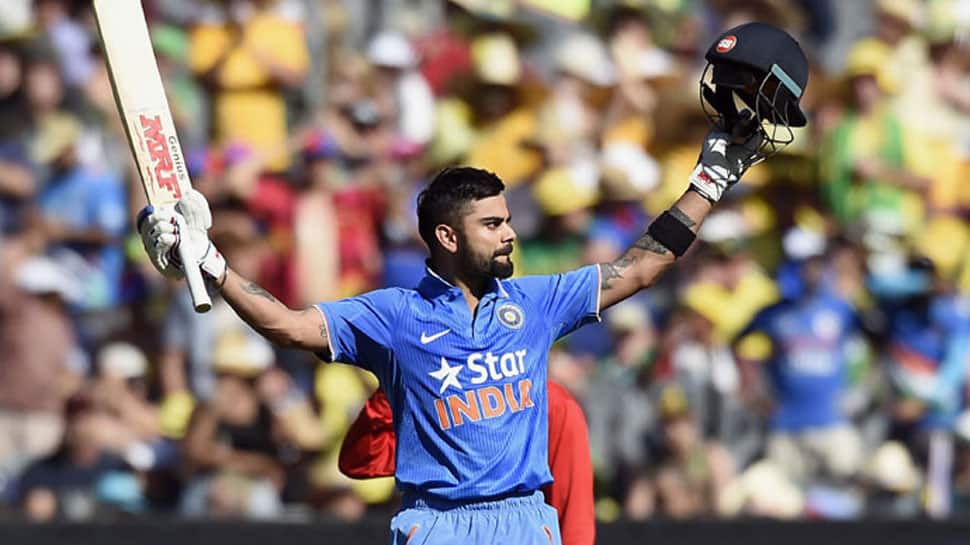 Virat Kohli smashed an unbeaten knock of 94 runs while opener KL Rahul well-supported him with a half-century as India beat West Indies by six wickets in the opening T20I of the three-match series at the Rajiv Gandhi International Stadium in Hyderabad on Friday.

# Shivam Dube is the new batsman in.

# WICKET! Soon after bringing up his half-century, KL Rahul (62) was caught by Pollard at long off on the third delivery of the 14th over by Khary Pierre. India 139/2 (14 overs)

# 17 runs off the last two overs for India. Kohli (3) defended the fifth delivery of the fifth over softly into the offside to open his account with a quick single before Rahul (31) notched up a maximum on the very next delivery by Sheldon Cottrell. India 50/1 (6 overs)

# WICKET! Khary Pierre gives a breakthrough to West Indies. Indian opener Rohit Sharma was caught by Shimron Hetmyer for eight at deep midwicket on the second delivery of the fourth over. India 33/1 (4 overs)

# Just four runs off the very first over. Rohit Sharma (3) got off the mark by chopping the second delivery to short third man for a single while Rahul (1) flicked the fourth delivery off the toes to deep square leg to open his account with a single. India 4/0 (1 over)

# Rohit Sharma and KL Rahul to open the batting for India. Sheldon Cottrell to open the attack for the West Indies.

# Jason Holder and Denesh Ramdin are currently batting at the crease.

# WICKET! Two wickets in an over for Chahal. The Indian bowled a full delivery on middle on the third delivery, forcing the batsman to come forward as the ball slid through the inside-half of the bat before clipping the leg stump. West Indies 178/5 (18 overs)

# WICKET! After bringing up his maiden half-century, Shimron Hetmyer (56) was caught by Indian opener Rohit Sharma at deep backward square on the first delivery of the 18th over. West Indies 172/4 (17.1 overs)

# West Indies added 12 runs in the last two overs. Shimron Hetmyer (42) and Kieron Pollard (20) are currently batting at the crease as the Caribbean side approaches the 150-run mark. West Indies 144/3 (15 overs)

# Kieron Pollard is the new batsman in for West Indies!

# WICKET! Birthday-boy Ravindra Jadeja finally gets the breakthrough by removing Brandon King (31). The Caribbean batsman missed the first delivery of the 11th over by Jadeja as Rishabh Pant collected the ball before swiftly whipped the bails off. West Indies 107/3 (11 overs)

# Yuzvendra Chahal comes into the attack!

# 16 runs off the last two overs. King (29) pulled the second delivery of the eight over towards extra cover for a boundary before he pulled the third delivery to long-on for four runs. West Indies 82/2 (8 overs)

# Ravindra Jadeja comes into the attack!

# WICKET!! Evin Lewis fell for 40 after being caught leg before wicket on the fourth delivery of the fifth over by Washington Sundar. West Indies 66/2 (6 overs)

# The Caribbean batsmen added 25 runs in the last two overs. Lewis (24) pulled the first delivery of the fourth over with a strong bottom hand towards fine leg for a six before he fiercely cut the very next delivery through point for four runs. King (17) pulled the fifth delivery of the same over towards deep square leg for six. West Indies 46/1 (4 overs)

# Brandon King is the new batsman in for West Indies.

# WICKET!! Deepak Chahar gives an early breakthrough to India. Lendl Simmons (2) edged the second delivery of the second over to slip, only to see Rohit Sharma take a comfortable catch. West Indies 21/1 (2 overs)

# A quite expensive first over by Washington Sundar as he conceded 13 overs to West Indies. Lewis (11) got off the mark with four runs by smashing the second delivery to short fine leg before he notched up a maximum on the very next ball. Simmons (2), on the other hand, worked the first delivery through midwicket to open his account with a single. West Indies 13/0 (1 over)

# Lendl Simmons and Evin Lewis have walked down the crease to open the batting for the West Indies. Washington Sundar to open the attack for India.

After dominating Bangladesh in Tests as well as the shortest format of the game, Virat Kohli-led India will look to continue their winning momentum when they head into the first T20I of the three-match series against West Indies on Friday in Hyderabad.

India were not at their absolute best in the three-match T20I series against Bangladesh under the captaincy of Rohit Sharma as they slumped to their first-ever defeat to their Asian neighbors in the format in the opening match in New Delhi.

However, the Men in Blue rebounded strongly to win the remaining two T20Is against Bangladesh and seal the series by 2-1. India also went on to win the subsequent two-match Test series, including the country's first-ever Pink Ball match.

India will be boosted by the return of their regular skipper Virat Kohli, who was rested for the Bangladesh T20Is before leading to side to Test series whitewash.

Notably, India had whitewashed West Indies in all three formats when they last visited the Caribbean Islands in August 2019.

West Indies, on the other hand, will look to play at their absolute best if they are to overcome India, an opponent against whom they have lost each of their last six T20Is.

The Kieron Pollard-led side is heading into the series against India on the back of a disappointing 1-2 defeat at the hands of Afghanistan in Lucknow.