India take on West Indies on Day 3 of the 1st Test at the Saurashtra Cricket Association Stadium, Rajkot on Saturday. 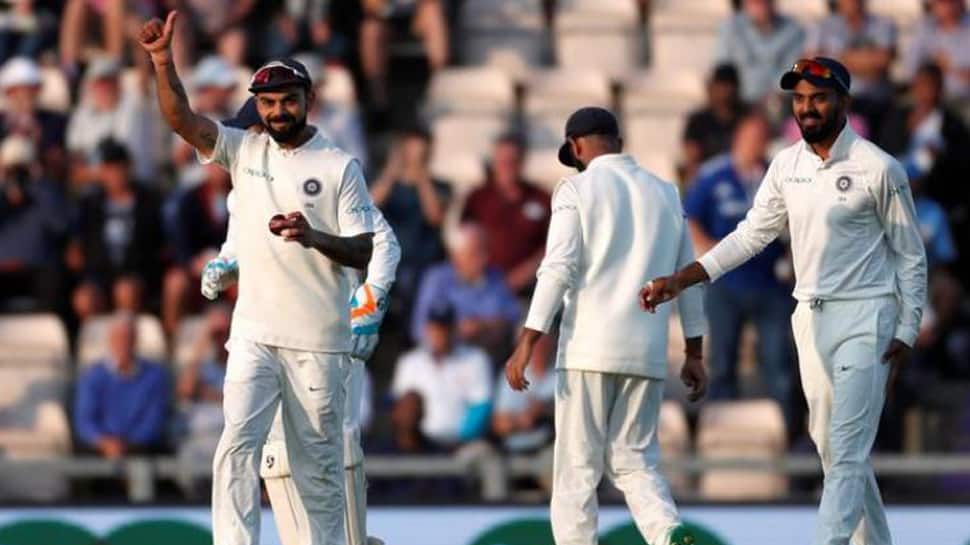 India registered a comprehensive win by the margin of an innings and 272 runs, wrapping up the 1st test match of the Paytm series played at Rajkot within the first 3 days without much ado. West Indian batsman Kieran Powell was the sole spark with the bat for the visitors, scoring 83 runs off 93 balls in a dismal performance which they will be looking to improve upon in Hyderabad.

# Wicket! Shannon Gabriel has been dismissed by Ravindra Jadeja while attempting a big shot, wrapping up the chase for team India who have registered a win by a huge margin of an innings and 272 runs. West Indies 196 after 50.5 overs.

#Wicket! Ravindra Jadeja picks his 2nd wicket in the innings as Sherman Lewis is judged leg before wicket by the umpire with West Indies refusing to make use of the 2 reviews in their kitty. West Indies 192/9 after 44 overs.

# Wicket! Ravindra Jadeja picks his 2nd wicket in the innings as Sherman Lewis is judged leg before wicket by the umpire with West Indies refusing to make use of the 2 reviews in their kitty. West Indies 192/9 after 44 overs.

# Wicket!  Devendra Bishoo has been declared out after a review by the Indian team following discussion over a nick which carried to the wicketkeeper off a Ravichandran Ashwin delivery. The initial decision of the umpire was overturned after replays confirmed that there was indeed some glove involved. Devendra Bishoo 9(12), West Indies 185/8 after 44 overs.

# The Indian bowlers have taken advantage of the lack of experience in the West Indian batting lineup with none of the batsmen indicating a desire to settle down on the pitch barring a fine knock by Kieran Powell. Shai Hope, Shimron Hetmyer and Sunil Ambris have been guilty of reckless strokeplay under pressure with Kuldeep Yadav making full advantage of it. India seems all set to register an innings victory which was never under threat. West Indies 177/7 after 42 overs.

# Devendra Bishoo is the next batsman on the crease with India in need of just 3 wickets to complete a comprehensive win.

# Wicket!  Ravindra Jadeja makes his presence felt with a shrewd delivery which tempts the batsman into a false stroke. Keemo Paul attempting to go for a big hit having smashed a six early on in his knock crumbles with Umesh Yadav making no mistake. West Indies 172/7 after 40.4 overs.

# Wicket! Kuldeep Yadav picks his maiden five-wicket haul in test cricket after dismissing Kieran Powell who seemed all set for a fine century following an aggressive knock. Powell struggled to keep the ball down, handing an easy catch to Prithvi Shaw at silly point expressing his anguish following the dismissal. Kieran Powell 83 (93), West Indies 151/6 after 35.4 overs.

# Shane Dowrich is the new man in at the crease for West Indies with Powell in-sight of a century having smashed 76 runs off 83 deliveries so far.

# Wicket! Roston Chase has surrendered the momentum back to team India after attempting a shot too many against spinner Kuldeep Yadav having smashed him for a boundary off the previous ball. Chase and Powell had struck a fine partnership with the bowlers under pressure. However, Chase chipped the ball straight to Ashwin at extra cover who completed a fine catch. West Indies have thrown it away yet again following a promising start. Roston Chase 20(24), West Indies 138/5 after 29.3 overs.

# Wicket! Kuldeep Yadav has struck yet again for captain Kohli deceiving No 5 batsman Sunil Ambris with a googly and extra bounce. Wicketkeeper Rishabh Pant made no mistakes, stumping the batsman at a lightning pace. Sunil Ambris 0(3), West Indies 97/4 after 22.4 overs.

# Wicket! Shimron Hetmyer is caught by K.L Rahul off Kuldeep Yadav after attempting to smash the ball into the stands. Hetmyer could not resist the desire to go for the shot off a flighted delivery, with an outside edge safely caught by Rahul. Shimron Hetmyer 11(11), West Indies 97/3 after 22.1 overs.

# Kieron Powell brings up his half-century off 55 deliveries. West Indies 93/2 after 21 overs.

# Shimron Hetmyer is the new man in, replacing Hope at the crease

# Wicket! Shai Hope dismissed by Kuldeep Yadav who pins him in front with a shrewd delivery which left him in two minds. Hope and Powell had stitched together a valuable partnership after lunch, displaying aggressive intent and a desire to go for the shots. However, Yadav has delivered with the ball when his side needed a breakthrough. Shai Hope 17 (34), West Indies 79/2 after 19 overs.

# Openers Kraigg Brathwaite and Kieran Powell ensured a composed 32-run opening partnership for the visitors after being sent in to bat again by team India. Powell set the stage early on with some delightful strokes against the Indian spinners with the visitors optimistic of not losing a single wicket before lunch. However, Hope and Powell will be looking to push on after lunch, despite Brathwaite's dismissal and score another 50-100 runs without losing wickets. West Indies 33/1 in 9 overs!

# Shai Hope is the next man on the crease and will face the last over from Kuldeep Yadav before lunch.

#Wicket!! Kraigg Braithwaite is dismissed by Ravichandran Ashwin who deceives the batsman with turn, inducing an edge with fielder Prithvi Shaw making no mistakes. West Indies lose their first wicket. 32/1 in 7.6 overs.

# Openers Kraigg Braithwaite and Kieran Powell have ensured a solid start for the West Indies with a desire to go for the shots at regular intervals. They have not allowed the Indian bowling attack to settle at any stage which is good news for the visitors. West Indies 28/0 after 7 overs, trail by 440 runs.

# Kohli will be expecting his bowlers to get the job done by striking early on in a test which has been largely dominated by the hosts. West Indies, on the other hand, will be looking to make amends following a shambolic performance in the 1st innings.

And, that's a happy bunch out there at Rajkot #TeamIndia have enforced the follow on, second innings coming up shortly. Stay tuned!

# Wicket!! Shannon Gabriel is stumped by Rishabh Pant who makes no mistakes with the gloves after Ravichandran Ashwin gets the ball to turn away from a full length on off stump. The tail-ender could not get back to the crease in time having lifted his back leg too soon, West Indies 181/10 after 48 overs.

# Bishoo looking to score some quick runs down the order with an eye on ensuring a respectable total having smashed three boundaries in the last three overs. West Indies 179/9

# Shannon Gabriel is the last man for West Indies and will be facing an uphill battle against the likes of Ashwin and Jadeja.

# Lewis is sent back to the pavilion soon enough following a beautiful delivery by Ravichandran Ashwin. West Indies are all set to crumble for a low score after being 9 wickets down.

# Sheman Lewis is the new man on the crease.

# Wicket!! West Indies in deep trouble as Royston Chase is bowled by Ravichandran Ashwin for a well made 53. Ashwin deceives the batsman with some vicious turn off the pitch leaving him baffled. Royston Chase 53 (79), West Indies 159/8 after 43.2 overs.

# Devendra Bishoo, the next man on the crease will be looking to provide some valuable support to Royston Chase who is looking good having brought up his half-century, West Indies 157/7 after 42 overs.

# Wicket!! Keemo Paul falls short of a well-deserved half-century. His entertaining knock finally comes to an end after attempting to smash Umesh Yadav for a boundary, only to lob the bouncer down to Pujara who makes no mistake. Keemo Paul 47(39), West Indies 147/7 after 39 overs.

# Roston Chase and Keemo Paul ensure a steady start for the visitors with the latter in good nick. West Indies 142/6

The Indian bowling attack will be looking to restrict the opposition to a paltry score with an efficient bowling display ensuring a dismal overnight score of 94/6 in 29 overs. Roston Chase and Keemo Paul, on the other hand, will be looking to lend a degree of respectability to the scorecard by scoring runs early on.

The Indian batsmen plundered runs after being sent in to bat early in the first test as captain Virat Kohli, debutant Prithvi Shaw and all-rounder Ravindra Jadeja smashed majestic centuries leading the team on to a score of 649.