India vs West Indies, 2nd T20I: As it Happened

Lendl Simmons smashed an unbeaten knock of 67 runs while Evin Lewis well-supported him with 40-run knock as West Indies thrashed India by eight wickets in the second T20I in Kerala on Sunday. 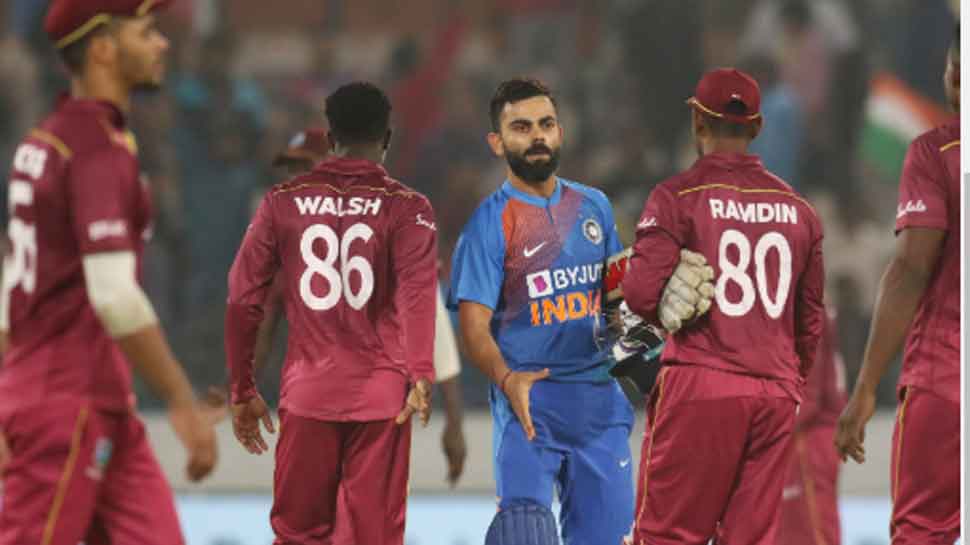 Lendl Simmons smashed an unbeaten knock of 67 runs while Evin Lewis well-supported him with 40-run knock as West Indies thrashed India by eight wickets in the second T20I to level the three-match series 1-1 at the Greenfield Stadium in Thiruvananthapuram in Kerala on Sunday.

# Lendl Simmons continues to stand strong at 64 while Nicholas Pooran (22) is well-supporting him from the other end. The Caribbean side has added 27 runs in the last two overs, including a six and three boundaries, to reduce the chase to 17 runs from 18 balls. West Indies 154/2 (17 overs)

# FIFTY!! Lendl Simmons has brought up his T20I fifty off 38 balls. He reached the mark by dragging the last delivery of the 15th over towards long-on for a six. West Indies 127/2 (15 overs)

# WICKET! A stunning catch from Indian skipper Virat Kohli at long on. Hetmyer went back to pavilion after scoring 23 after he slapped the fourth delivery of the 14th over towards the non-striker , only to see Kohli threw his body into the air and take a stunning catch. West Indies 112/2 (13.4 overs)

# WICKET! India have finally got the breakthrough as Evin Lewis was stumped by Rishabh Pant on the fifth delivery of the 10th over. The Caribbean batsman went back to the pavilion after scoring 40. West Indies 73/1 (10 overs)

# West Indies added 20 runs in the last two overs. Simmons (29) smashed the second delivery of the eighth over into the sightscreen at bullet speed for a maximum before he hit the third delivery from Chahal of the ninth over through Jadeja's legs at point. He then sent the very next delivery over deep midwicket for a six. West Indies 71/0 (9 overs)

# 25 runs off the last two overs, including three maximums by Lewis (38). The Caribbean side has now crossed the half-century mark and reduced their chase to 120 runs. West Indies 51/0 (7 overs)

# Good last over for the Caribbean side as they added 13 runs. Evin Lewis (16) smashed Deepak Chahar for two back-to-back boundaries on the first and second delivery of the third over. West Indies 22/ 0 (3 overs)

# Nine runs off first two overs. Simmons (1) got off the mark by flicking the third delivery through midwicket for one run, Lewis (4) edged the sixth delivery over slip to open the attack with four runs. West Indies 9/0 (2 overs)

# Lendl Simmons and Evin Lewis will begin West Indies' chase. Deepak Chahar will open the proceedings for the hosts.

# Deepak Chahar is the new batman in!

# WICKET!! India are now down by six wickets after Ravindra Jadeja (9) was clean bowled by Kesrick Williams on the sixth delivery. India 164/6 (19 overs)

# WICKET! Shreyas Iyer (10) tried to smash the second ball of the 17th over towards cover for Brandon King to take a comfortable catch. India, however, have crossed the 150-run mark. India 150/5 (17 overs)

# WICKET! Virat Kohli (19) lobbed the second delivery of the 14th over by Kesrick Williams to the short third man, only to see Simmons take a good catch. India 128/4 (14 overs)

# 15 runs off the last two overs, including two boundaries from Kohli (19). The Indian skipper smashed the last delivery of the 12th over to cover for four runs before he went beyond the stumps on the fourth delivery of the 13th over and dragged a sweep to the cow-corner for a boundary. India 119/3 (13 overs)

# WICKET! Soon after bringing up his maiden international half-century off just 27 balls, Dube (54) slashed the third delivery of the 11th over by Hayden Walsh at cover, only to see Hetmyer take a good catch. India 104/3 (11 overs)

# A quite expensive over by Kieron Pollard as he conceded 26 runs to the Men in Blue. Shivam Dube smashed the third delivery of the ninth over towards deep square leg for a maximum before he smashed the West Indies bowler for back-to-back sixes. India 84/2 (9 overs)

# Skipper Virat Kohli is the new batsman in for India!

# WICKET! Rohit Sharma went back to the pavilion after scoring just 15 runs after he was castled by Jason Holder on the fourth delivery of the eight over. India 56/2 (7.4 overs)

# 13 runs off the last two overs. Dube (eight) edged the third delivery of the fifth over by Jason Holder to the third man for a boundary before Rohit Sharma (11) sent the last delivery towards deep square leg for four runs. India 37/1 (5 overs)

# Shivam Dube is the new batsman in!

# WICKET! Khary Pierre gives a breakthrough to the West Indies. KL Rahul (11) was caught by Shimron Hetmyer at deep square leg on the first delivery of the fourth over. India 24/1 (3.1 overs)

# 12 runs off the last two overs. KL Rahul (11) cut the third delivery of the second over through covers with terrific timing to notch up four runs. India 24/0 (3 overs)

# Good first over for India as they added 12 runs. Rohit Sharma (5) got off the mark with a single by smashing the first delivery through square leg, KL Rahul (one) steered the third delivery to third man to open the account with a single. India 12/0 (1 over)

# Rohit Sharma and Kl Rahul have walked down the crease to begin India's innings. Sheldon Cottrell to open the attack for West Indies.

On Friday, Kohli led from the front as he smashed a blistering unbeaten knock of 94 runs while KL Rahul well-supported him with a 62-run knock as India successfully hased down their highest-ever 208-run target in T20Is with eight balls to spare.

However, the Indian team failed to click in the other two departments as they dropped many catches and were also sloppy in fielding and bowling as West Indies posted a huge total of 207 for five in their stipulated 20 overs.

Shimron Hetmyer (56 off 41 balls) smashed his maiden T20I half-century while Evin Lewis pulled back 40 runs off just 17 balls to help West Indies post a mammoth total. Skipper Kieron Pollard and Brandon King were other notable contributors for the visitors with 37 and 31 runs, respectively.

Yuzvendra Chahal picked up two wickets for India while giving away 36 runs. Birthday boy Ravindra Jadeja, Deepak Chahar and Washington Sundar all chipped in with a wicket each.

Heading into the second T20I, India will look to come up with a much-improved bowling performance and seal the series with a game to spare.

The Caribbean side, on the other hand, will be keen to bounce back and level the series.