Rohit Sharma, who led the Men in Blue in the absence of rested regular skipper Virat Kohli in the last two ODIs, will continue to lead the charge as India look to record their maiden T20I series win in New Zealand. 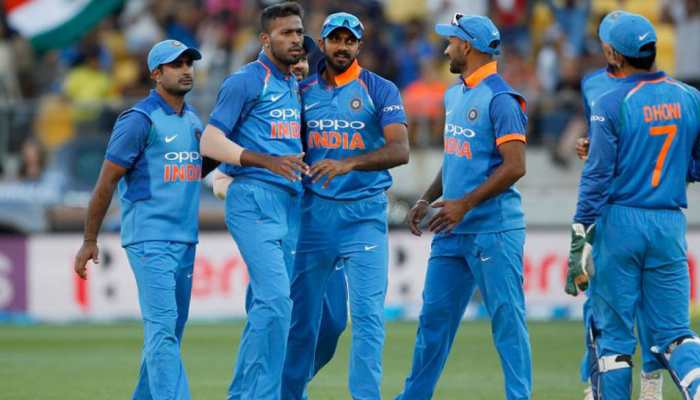 After clinching the five-match ODI series against New Zealand, India are all set to take on the Black Caps in the three-match T20I series from Wednesday at Westpac Stadium.

Heading into the series, the Men in Blue will be brimming with confidence and look to continue their winning momentum against the Black Caps in the 20-over format as well.

India had outplayed the hosts in all the departments in the first three ODIs before they slumped to a humiliating eight-wicket defeat in Hamilton. However, they bounced back in style to register a 35-run win in the fifth and final match in Wellington to claim the series 4-1.

Having already lost the ODI series, New Zealand, meanwhile, will look to take some inspiration from their thumping victory in Hamilton and put up a much-improved performance in the T20I series.

Rohit Sharma, who led the Men in Blue in the absence of rested regular skipper Virat Kohli in the last two ODIs, will continue to lead the charge as India look to record their maiden T20I series win in New Zealand.

Here is a look at some of the records which the Men in Blue have made in T20Is against New Zealand:

# The two sides have met each other in T20Is eight times, with New Zealand having an upper hand with a 6-2 head-to-head record in their favour.

# Interestingly, the Men in Blue have played just two T20Is against the Black Caps in New Zealand and the hosts clinched victories on both the occasions. On February 25, 2009, India slumped to a seven-wicket defeat against New Zealand in Christchurch before the visitors lost by five wickets in Wellington just two days later.

#  In March 2016, India recorded their lowest total against New Zealand in the shortest format of the game as they were bowled out for 79 runs in their stipulated 20 overs during an ICC World Cup clash in Nagpur. Veteran wicketkeeper-batsman Mahendra Singh Dhoni was the highest scorer for the Men in Blue with 30 runs in the match, which the Black Caps won by 49 runs.

#  India's highest total against New Zealand in T20Is came on November 1, 2017 when they posted a score of 202/3 in the first of the three-match series at the Feroz Shah Kotla Stadium. The opening duo of Shikhar Dhawan and Rohit Sharma smashed 80 runs each as the hosts marched to a 53-run win over New Zealand.

# Dhawan and Rohit's knocks of 80 in Delhi ODI in 2017 still remains the highest score by an Indian batsman against New Zealand.

# Former Indian cricketer Irfan Pathan recorded the best bowling figures by an Indian against New Zealand in T20Is. He finished with the figures of three for 31 during the second T20I of the two-match series in Chennai on September 11, 2012.

# Meanwhile, the record of the highest partnership between an Indian pair against New Zealand in the shortest format of the game is held by Rohit Sharma and Shikhar Dhawan. The duo shared a huge stand of 158 runs for the opening wicket on November 1, 2017 in the opening T20I in New Delhi.