IPL 2017, Qualifier 1: Mumbai Indians vs Rising Pune Supergiant – Players to watch out for!

And one team that has been the bane in Mumbai's juggernaut – their state cousins, has been Rising Pune Supergiant, who crumbled them both at home and away 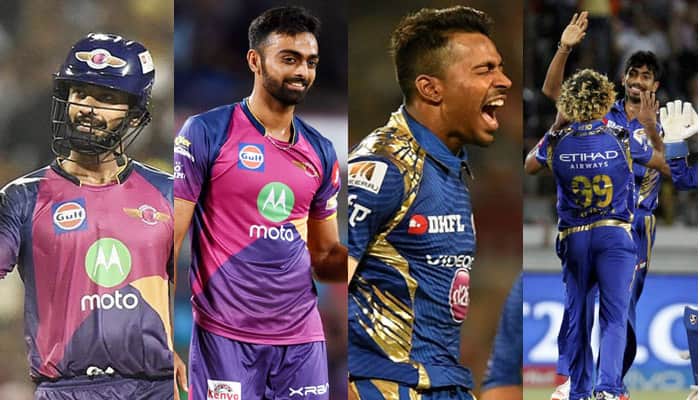 New Delhi: And it is Maharashtra Derby once again, only this time both teams will be vying for a spot in the final. It is Mumbai Indians taking on their neighbours, Rising Pune Supergiant in Qualifier 1 of the 10th season of Indian Premier League (IPL), at Wankhede, tonight.

Mumbai Indians, finishing atop the league stage with 20 points from 14 matches, was the first of the lot to qualify for the play-offs. The usual slow-starters of the tournament found themselves on a roller-coaster ride as victory came to them like easy boundaries, except four occasions when Rohit Sharma's Men in Blues had to see the other side of the coin. And one team that has been the bane in their juggernaut – their state cousins, has been Rising Pune Supergiant, who crumbled them both at home and away.

An early jolt in the 10th edition saw Rising Pune Supergiant stumbling down the table, when they welcomed Mumbai Indians for the first time this season at Pune. A spectacular seven-wicket victory over Mumbai, and next the fans started witnessing was Pune's slow and unnoticed prowess in the league. Amid discussions on his poor form, MS Dhoni showed glimpses of his wizardry. Ben Stokes rose from faltering expectations to prove why he is the costliest foreign player. Their season's revelation has been a pack of youngsters – Jaydev Unadkat, Rahul Tripathi, Shardul Thakur, who have all come forth to assist the team to the play-offs. Regardless of all, Pune will have a bit of tension in mind as they head into the game with no Ben Stokes featuring the playing XI.

Speaking about the Mumbai-based franchise, Ambati Rayudu's return from injury to score 63 against Kolkata, will come quite handy for Rohit Sharma, who did show a bit of concern over Nitish Rana's falling scores. The Pandya brothers have been simply spectacular throughout the season. Jasprit Bumrah and Mitchell McClenaghan will once again combine to form a formidable pace attack to stop Pune from creating another upset.

A glance through the history books – the team who have stood second as per league stage, have always been the first to qualify for the finale.

Here are some of the players to look out for tonight's crucial encounter...

Hardik Pandya: A poor IPL season last year, coupled with few injuries, put doubt over his performance radar as Mumbai Indians kick started their 10th campaign. But his critics were proved wrong as the younger of the Pandya brothers, rocked the fans with the bat and shook the opponents with the ball.
In their last match against Kolkata Knight Riders, Hardik pulled a similar who in the final over, as that in World Cup T20 against Bangladesh.

Jasprit Bumrah: An epitome of a death over bowler. He can bowl slow yorkers, wide yorkers, quicker bouncers...you name it. In fact in his first super over ever, he outfoxed two overseas power-hitters, Aaron Finch and Brendon McCullum to clinch a victory against the Gujarat Lions.
Something that would be worth watching is his competition with MS Dhoni. A battle of the finishers.

Rahul Tripathi: His consistency up the order has proved quite handy for the Pune-based franchise. Complementing his opening partner Ajinkya Rahane, Tripathi is more of an aggressor and thus has the ability to set blaze their score in the power-play overs.
A piece of delight is when the 26-year-old shimmies down the track to attack the pacers. Kind of remind fans about Gary Kirsten.

Jaydev Unadkat: He is having the season of his life. From being lucky enough to squeeze into the playing XI replacing batsmen's favourite Ashok Dinda, to picking up two fi-fers in this edition, Unadkat has been a key player for the Pune franchise.
With 21 wickets off 10 matches, the 25-year-old is second in contention for the purple cap. What analysts have in fact noted that, Jaydev has knocked down more upper-order batsmen than Bhuvneshwar Kumar, who has maximum tail-ender victims.
His wide yorkers and slow off-cutters is what makes him the player to watch out for.