Must Watch: HATS OFF! When Graeme Smith batted against Mitchell Johnson with a broken hand

Smith was batting on 30 in the first innings when one of Johnson's deliveries hit a finger on his left-hand. 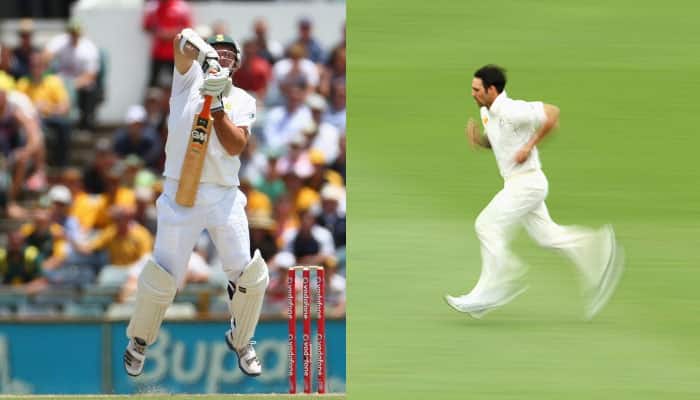 New Delhi: Whenever we recall the most fearsome bowlers to have played cricket, Mitchell Johnson is one name, which will automatically come to mind. (WATCH: All VIRAL CRICKET Videos)

Johnson, who played 73 Tests and 153 ODIs for Australia, instilled fear in the minds of the best batsmen with his unplayable deliveries.

While he was a nightmare for most of the batsmen, there was once instance where former South African skipper Graeme Smith batted against him with a broken hand.

The incident took place during a Test match between the two teams at Sydney Cricket Ground in 2009. (WATCH: HILARIOUS! Ravindra Jadeja's reply to why new batsmen find it tough on turning tracks)

Smith was batting on 30 in the first innings when one of Johnson's deliveries hit a finger on his left-hand. The Proteas skipper was immediately off the field and didn't bat for the rest of the innings as a result of a broken finger.

In their second innings, chasing a target of 376 runs, South Africa lost their ninth wicket at the score of 257. With Smith retired hurt, the Aussies began to celebrate, before something incredible happened.

The crowd rose to its feet as they saw Smith coming to back to bat.

It was a very brave decision from Smith, who knew he would have to face Johnson with a broken hand. (WATCH: Amazing! What happened when Virender Sehwag was on 183 against Pakistan?)

Showing no mercy to his counterpart, Aussie skipper Ricky Ponting brought Johnson soon into the attack.

Smith survived for 17 balls, seven of which were bowled by Johnson, but the eighth one deceived him to crash into the stumps.

South Africa lost the Test by 103 runs, but Smith will always be remembered for his move which won him respect from the entire cricket fraternity: