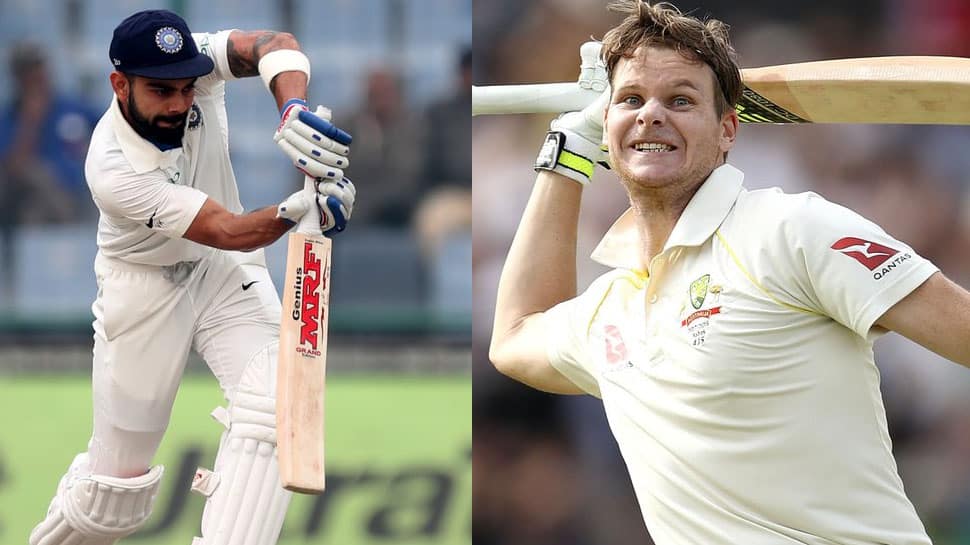 Australia star Steve Smith is back on top of the list of batsmen in the MRF Tyres ICC Test Player Rankings after India captain Virat Kohli failed to live up to his name in his two innings in the first Test against New Zealand in Wellington.

International Cricket Council (ICC) said in a press release that Kohli dropped 5 points after a poor outing in Wellington Test. It may be recalled that India skipper scored only 2 runs in the first innings and 19 in the second innings of India's 1st Test against New Zealand.

Kohli is currently at the second spot in the ICC rankings for Test batsmen with 906 points, while Smith is on top with 911 points. Besides Kohli, Ajinkya Rahane (760), Cheteshwar Pujara (757) and Mayank Agarwal (727) are the three Indian batsmen in the top 10 list at 8th, 9th and 10th positions respectively.

After scores of 2 and 19 in the first #NZvIND Test, Virat Kohli has suffered a slip, allowing Steve Smith to move back to the No.1 spot on the @MRFWorldwide ICC Test Rankings for batsmen! pic.twitter.com/JtakdSdp6C

ICC's press release said that this is the eighth time that Smith is on top of the rankings after first reaching on top of the Test batsman list in June 2015.

New Zealand captain Kane Williamson is at the third spot with 853 points. Williamson jumped to third positon after gainingd 31 points due to his his innings of 89 in the first Test against India.

"New Zealand’s Ross Taylor and Colin Grandhomme have moved up the batsmen’s list while fast bowlers Tim Southee and Trent Boult have made big gains after finishing with nine and five wickets, respectively. Southee has advanced eight spots to take sixth position, which is his highest since a career-best fifth place in June 2014. Boult has moved up four slots to take joint-13th position," said ICC in a press release.

"Bangladesh’s Mushfiqur Rahim has risen five places to return to the top 20 after his double-century in Mirpur while captain Mominul Haque has moved up five places to 39th after a score of 132. Nayeem Hasan is the big news for the team with his nine wickets lifting him 29 places to 38th position among bowlers. Abu Jayed has moved up 11 places to 46th," it added.

In the ICC World Test Championship, New Zealand are on 120 points after earning 60 points for their convicing win at Wellington.