After India's series-leveling crushing 107-run victory over the Caribbean side in the second Test, the two sides got a three-day gap before the series-deciding clash. 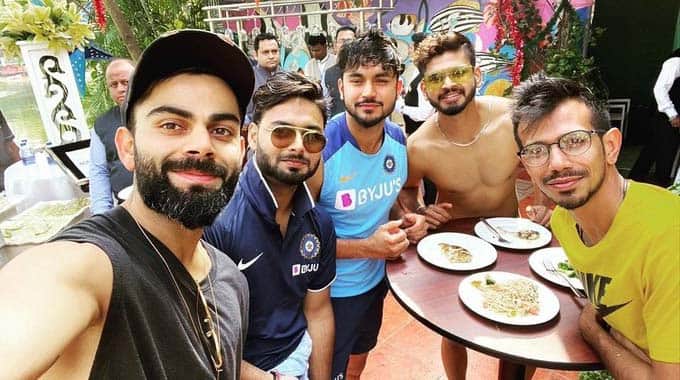 Skipper Virat Kohli and the other members of the Indian men's cricket team were recently seen enjoying a 'day-off' ahead of the crucial third and final One-Day International (ODI) of the three-match series against the West Indies on December 22 at Barabati Stadium in Cuttack, Odisha.

After India's series-leveling crushing 107-run victory over the Caribbean side in the second Test, the two sides got a three-day gap before the series-deciding clash.

With no practice session scheduled to take place on Friday, Kohli and the company decided to use the opportunity to refresh themselves ahead of the Cuttack ODI.

Taking to his official Twitter handle, the 31-year-old Indian skipper posted a picture of him along with his teammates wherein the players could be seen chilling.

"A day off and an afternoon with the boys is exactly what we needed," he wrote.

A day off and an afternoon with the boys is exactly what we needed pic.twitter.com/6K3KLW63iJ

Besides Kohli, the other members of the Indian team also took to social media and posted the pictures from their day-off.

"Much needed time to unwind with the team.#IndianCricketTeam #FridayFeeling #Downtime #Luncheon #Chilling," opener Mayank Agarwal wrote along with the picture.

Shreyas Iyer, meanwhile, also posted a picture with his teammates and tweeted, "Fun day out with the boys."

Fun day out with the boys  pic.twitter.com/n6s96rmPNz

Earlier, Rohit Sharma (159) and KL Rahul (102) smashed blistering centuries before Kuldeep Yadav and Mohammad Shami picked up three wickets each to help India crush West Indies by 107 runs in the second ODI at the ACA-VDCA Cricket Stadium in Visakhapatnam and level the three-match series 1-1.

India posted a target of 388 runs in their stipulated 50 overs after being asked to bat first by the Carribean side. In reply, the visitors were bundled out for 280 in 43.3 overs despite some good efforts by Shai Hope (78) and Nicholas Pooran (75).

The Men in Blue will now look to continue their momentum heading into the final clash. West Indies, on the other hand, will be keen to bounce back and take inspiration from their opening ODI win.

Paul Harris to assist Keshav Maharaj ahead of England Tests