Australia ruthlessly demolished England by 64 runs at Lord`s on Tuesday to march into the Cricket World Cup semi-finals and put the hosts in serious danger of failing to make the last four. 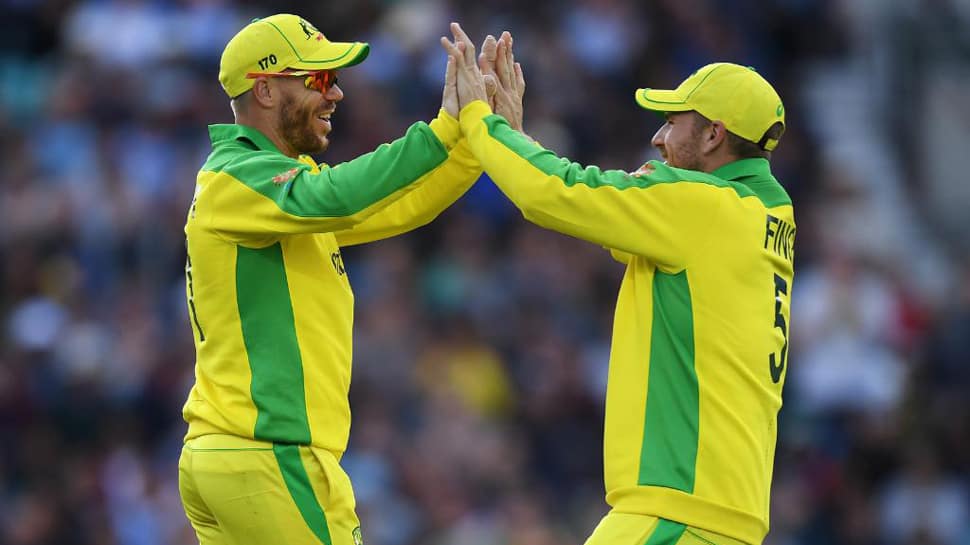 LONDON: Australia ruthlessly demolished England by 64 runs at Lord`s on Tuesday to march into the Cricket World Cup semi-finals and put the hosts in serious danger of failing to make the last four.

Captain Aaron Finch continued his fine form with a knock of 100 to lead Australia to 285 for seven after being put in to bat on a murky morning at the home of cricket.

England quickly collapsed to 26 for three and although Ben Stokes defied a calf injury to score a brave 89, England never seriously threatened to reach their target as Jason Behrendorff took five wickets and they were bowled out for 221 in the 45th over.

Australia`s sixth win in seven games took the defending champions into the semi-finals while England, the pre-tournament favourites, have now lost three matches and may need to beat India and New Zealand to make the knockout stages.

"You don`t win the tournament if you don`t reach the semis. That`s the first bit ticked off," said man-of-the-match Finch.

"England are a standout side, they are a team that can take you apart at stages. We found ways to keep getting wickets. Behrendorff bowled beautifully."

England made a shocking start to their chase when James Vince was comprehensively bowled second ball for nought by Behrendorff.

Stokes and Jonny Bairstow tried to engineer a recovery but Bairstow, on 27, played a wild heave off Behrendorff and gave Cummins another comfortable catch on the boundary.

Stokes reached a patient fifty off 75 balls and he and Jos Buttler added 71 before Buttler (25) tried to pull Marcus Stoinis for six and picked out Usman Khawaja running round the square leg boundary.

Stokes, struggling to run and requiring on-field treatment, launched Glenn Maxwell for two sixes and England had the faintest sniff of an unlikely win until Starc returned to the attack and bowled Stokes with a fierce yorker.

Moeen Ali was caught by wicketkeeper Alex Carey off Behrendorff for six, Chris Woakes fell for 26 and Jofra Archer (one) became Behrendorff`s fifth victim before Adil Rashid was last man out for 25.

"I thought for a lot of today we were outplayed," Morgan said.

"Losing early wickets was not ideal and we were not able contribute to a substantial partnership to win the game. Given the circumstances it is not hugely disappointing. Our fate is in our own hands."

Australia openers Finch and David Warner survived a testing opening burst by the England pace attack before sharing a fluent partnership of 123, their fifth fifty stand in a row.

Warner, on 53, spooned a catch to Root at backward point off Moeen and after Stokes had bowled Khawaja for 23, Finch reached three figures for the second time in the tournament.

He skied Archer`s next delivery straight into the hands of Woakes at fine leg, however, and Australia lost momentum as Maxwell was out for 12 and Stoinis was run out for eight following a comical mix-up with Steve Smith.

The former Australia captain made 38 before chipping Woakes to Archer at mid-on, and he left the field to a smattering of boos in reference to his role in last year`s ball-tampering scandal.