WTC Final: Tim Southee on cusp of breaking THIS record of MS Dhoni 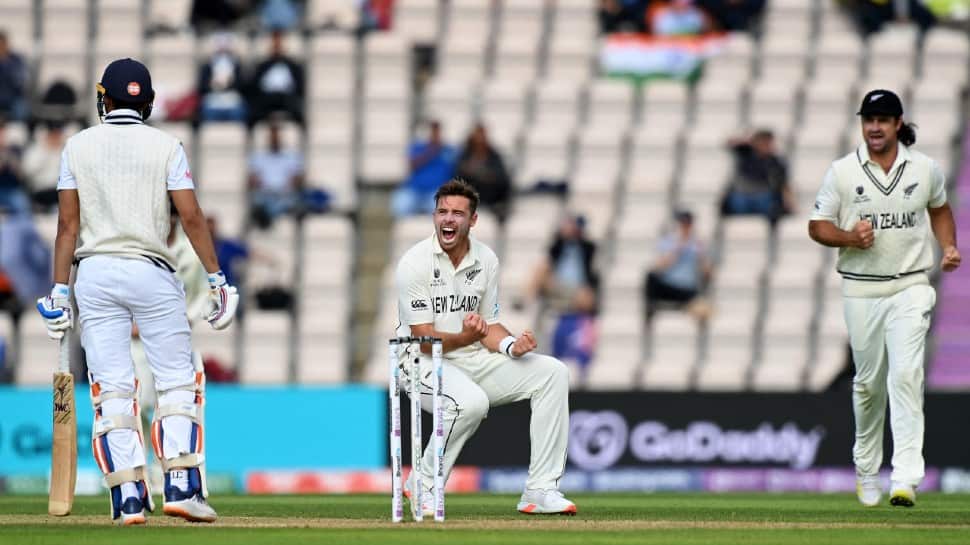 New Zealand paceman Tim Southee is not only smashing bowling records but he is also creating new records with the bat. Southee smashed two sixes in his 30-run knock in the ongoing World Test Championship final against India at the Ageas Bowl, Southampton on Tuesday (June 22).

In fact, Southee is on the cusp of breaking former India captain MS Dhoni’s record as well. The Chennai Super Kings skipper had notched up 78 sixes in 90 Test matches.

The Kiwi speedster is no mug with the bat as he has an average of 20.55 in Test cricket. Southee has scored a total of five fifties in the red-ball version whereas he has scored 1,728 runs.

Most sixes in Test cricket

On the other hand, Southee also took his 600th wicket in International cricket across the three formats when he trapped Shubman Gill in front of the wickets. Meanwhile, his crucial cameo helped New Zealand get past India’s score of 217 runs. New Zealand was skittled out for 249 runs and thus got a lead of 32 runs.

New Zealand were languishing at 162/6 but were eventually scored 249 runs to take a 32-run first innings lead, thanks to valuable knocks by the tail-enders including Southee, who scored 30.

“We would have liked to get a few more (runs), get a bit of lead of over 50, but I think, the Indian side were outstanding with the ball and put us under pressure at the start of the day. So for us to sneak past and get a 30-odd run lead was nice in the end,” Southee said at the end of Day 5.

“But you always want more. It is shaping up for an intriguing day tomorrow. That is a quality Indian batting line-up with two of their best (batters) at the crease at the moment. So we have to be on top of our game tomorrow and that first hour or two are going to be crucial on each side, it will set up the day,” the right-arm pacer added.