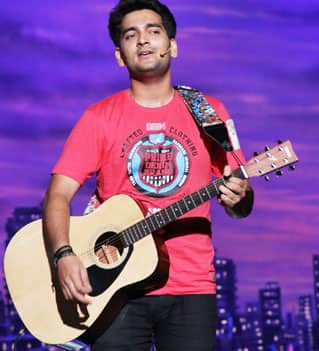 Having been Delhi’s youngest RJ at the age of 14, ten years later Abhimanyu is all set to take the world of movies by storm with his latest audition at Zee TV’s upcoming reality show – India’s Best Cinestars Ki Khoj.

Having won accolades at a very young age, Abhimanyu had always dreamt of becoming an actor. Given his amazing oratory skills, Abhimanyu left no chance to impress the judges Sonali Bendre and Victor as also the gorgeous ‘Bollywood buddy’ on the show – Parineeti Chopra. Having caught her attention, he left no chance to engage her in his act. From playing the guitar to having her groove to the music he played, Abhimanyu became her blue-eyed boy during the auditions. As if singing and dancing wasn’t enough, he ensured that he turned to her first for a feedback post every act. Congratulating him for an amazing act, Parineeti complimented him as well and said, ‘Aap main kuch baat hai! (You definitely have a spark!). I have seen a lot of performers, but the way you enticed the crowd was mind blowing. I think that is what is needed to become a star and you have it.”

Being noticed and complimented by Parineeti, Abhimanyu was glad to have heard kind words from Sonali and Victor as well. While everybody seemed to love his act, only time will tell if he will make a place for himself in the Top 16!

Starting on 5th July at 9 PM and airing every Saturday & Sunday on Zee TV is an exciting, new series called ‘Cera India’s Best Cine Stars Ki Khoj powered by Glam up’ – a hunt for the most versatile, talented cine stars who have it in them to light up the silver screen with their acting prowess and charisma! The show will put its participants through a slew of challenging rounds designed to test their creativity and ability of enacting a variety of different roles. Spanning genres like romance, comedy, drama, dance and action, the contestants will be called upon to prove their versatility, presence of mind, spontaneity and sheer mettle across a number of different acting styles. So, with some power-packed histrionics and mind-blowing performances coming your way from some of the most promising acting talent in the country, this journey of young actors from Zero to Hero is bound to be packed with non-stop entertainment all along the way!

Cera India’s Best Cinestars Ki Khoj powered by Glam Up starts on 5th July, every Saturday and Sunday at 9 PM, only on Zee TV!