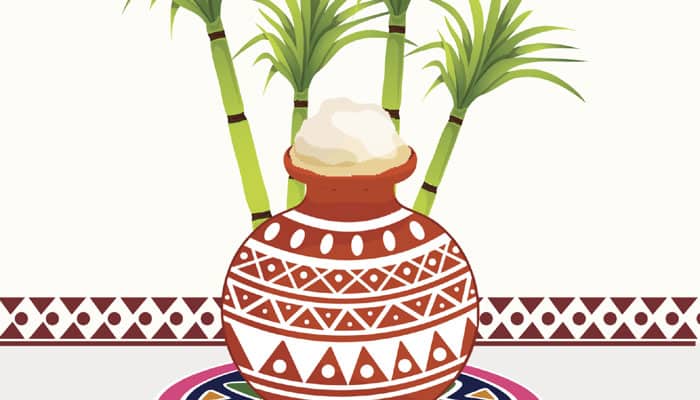 One of the main attraction of the festivals is the 'kolam' or rangolis. These floral patterns are made on the floor using white paste of newly harvested rice with outlines of red mud. Traditionally, pumpkin flowers were set into cow-dung balls and placed among the patterns.

"Pongal Kolams are traditionally drawn in front of the house but nowadays in Delhi, people draw it in front of their doorway, inside the house using rangoli colours and offer prayers," says KV Terumal, Vice President, Delhi Tamil Sangam.

"Since such floral patterns are an important part of the festival, we are organising a 'muggu' competition or rangoli-making competition at the Andhra Bhavan on January 14," says Kiran Kumar from Andhra Pradesh Bhavan.

On the first day of Pongal festival, known as 'Bhogi' a special puja is performed before the cutting of paddy. Farmers worship the sun and the earth by putting sandalwood paste on their ploughs and sickles. These tools are then used to cut the newly-harvested rice.

In Tamil urban families, people light a bonfire in the evening and discard their old belongings and some grains in the fire, a practice similar to Lohri. The same culture is followed in Andhra Pradesh also on Bhogi. Another ritual followed among the people of Andhra is to protect their children from the evil eye.

"Children below the age of five years are made to sit outside their homes where people pour 'Regi Pandlu' or small berries and coins on children to protect them from evil eye. Later, these are collected by other children," says Kumar.

The second day, the main day of celebration is when the new rice is collected and cooked in pots until they overflow. This overflowing signifies Pongal. The Sun God is offered boiled milk and jaggery. Tamils watch the boil over of milk as it is considered a good omen and symbolises prosperity.
"The Pongal was originally made in earthen pots. But people in Delhi now buy brass or some metal vessel," says Rajesh Packiaranjan who runs a Tamil Nadu Store in Karol Bagh.

He points out that the sugarcane used in the 'puja' is different from those used in North India. "The sugarcanes that we get here are usually white inside but the ones used in Pongal pujas are slightly red in colour. These stacks of sugarcane are kept beside the vessel in which rice in cooked and later served with rice. A small flower shop in the market stocks sugarcane as well as plantain leaves and turmeric used for pujas," says Packiaranjan.

In Andhra Pradesh, a variety of special delicacies are prepared and offered to the God. "People make 'Appalu', which is like a sweet paratha made of jaggery and 'Ariselu', which is like the north Indian 'maal-pua' but a little hard. They offer these to the God," says Kumar.

Kumar says that bull cart and cockfights are also held in Andhra Pradesh on the second day. Similar tradition is followed among Tamils, known as 'Mattu Pongal.'

On this day people offer prayers to the cattle and participate in games like 'Jallikattu' or taming of bulls. This traditional sport was banned by the Supreme Court last year based on a petition filed People for Ethical Treatment of Animals.

"Tamil Nadu CM is already in consultation with the central government to lift the ban. However, Jallikattu was not held in Delhi as such. Even in Tamil Nadu it is not done everywhere. It is more common in places like Madurai, Tiruchirapalli and Tanjavur," says Vice President of the Delhi Tamil Sangam.

"Elsewhere, people keep bullocks in their house, decorate their horns and body and worship them," he adds. The next celebration is known as 'Kaanum Pongal' among Tamils and Kanuma among people of Andhra Pradesh. The rituals observed on this day are similar for both.

"On Kanuma, clothes and money are distributed to workers. Even a portion of paddy is also distributed," says Kumar from Andhra Bhavan. Kumar says that the last day among people of Andhra is celebrated as 'Mukkanuma' where cows are worshipped.

The Delhi Tamil Sangam also organises folk dances and folk songs. Artists from Chennai fly down every year for the celebrations. This year, however, only a small celebration has been planned on January 16 and we intend it to limit to the staffers.

"But we are celebrating Pongal today at the residence of Union Minister Venkaiah Naidu, where Prime Minister Narendra Modi is also expected to come,? said the vice president of the society.

India's first science-meets-art festival to be held in Goa