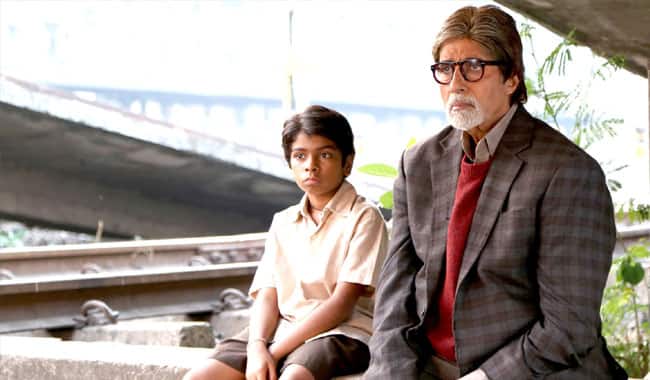 The director Nitesh Tiwari has picked the right time to release the sequel `Bhoothnath Returns`. The wave in the country for a change of the face of politics is high, and the movie certainly takes the ride.

`Bhoothnath Returns` picks up from where `Bhoothnath` left off. A ghost mocked for his inability to scare kids in heaven, returns to the mortal world to try his hand with some urban Mumbaikars. With little success in scaring children, the ghost turns to change lives of the oppressed and decides to do some good for the society instead. As Bhoothnath (Amitabh Bachchan) enters the murky world of politics, the tone of the movie changes from a comedy for children to sending out a message to the country.

The performances of each of the actors is exemplary and Parth Bhalerao is endearing, smart and matches up to Big B without the slightest hesitation, much like his character `Akhrot`. Boman Irani is as usual his best as the comic-villian Bhau and the transition he shows from being a humour inducing goon to a truly menacing politician eliminating his opposition with his trusted sidekick(Brijendra Kala) is spectacular. Sanjay Mishra in a small role as a honest lawyer makes you wonder why he doesn`t get meatier roles in Bollywood.

Parth as Akhrot makes the movie worthwhile, even with a sluggish second half. It would not be too wrong to say that the young lad acts with the prowess that overshadows Sr Bachchan`s performance at times. He has some of the best moments of the movie and the director has really picked a gem who we hope to see more often on the silver screen.

Storywise the movie is predictable and loses it`s humour soon after the interval. The done to death plot of the small fry trying to take on corrupt politicians with unconventional methods and winning over the hearts of the audience was also not unexpected. But the movie is unpretentious. The laughs are witty as well as natural and even with some jokes that are inspired. Even though `Bhoothnath` has the young as it`s audience, the sequel targets the adults urging the masses to go out and vote to the right man. There are a few cameo appearances too by Shah Rukh Khan, Ranbir Kapoor and Anurag Kashyap, probably endorsing the mood of the film.

Watch the 'Vote Do' Campaign of 'Bhoothnath'

I would not be too surprised if the movie soon gets the tax exemption as the message is loud and clear `Go out and vote, be the change`. The movie does not side with a particular party and is careful to avoid any kind of communal focus. However, this bit does tend to border on being preachy. The second half of the movie fizzles out and the last half an hour truly drags on.

The music in `Bhoothnath...` is passable and not much is of mention. The real life images during the soulful `Sahib`, penned by Munna Dhiman, composed by Ram Sampath and rendered by Rituraj are heart rendering.

We would have to wait and see whether the movie makes much of an impact at the Box Office, nevertheless it does have an important message, especially considering the time. It is intentional for sure, but `Bhoothnath Returns` should be watched by children as well as adults; even if the intention is to bring the common man out to vote for a change in the system.

`Rio 2` review: Will appeal to adults as well as kids