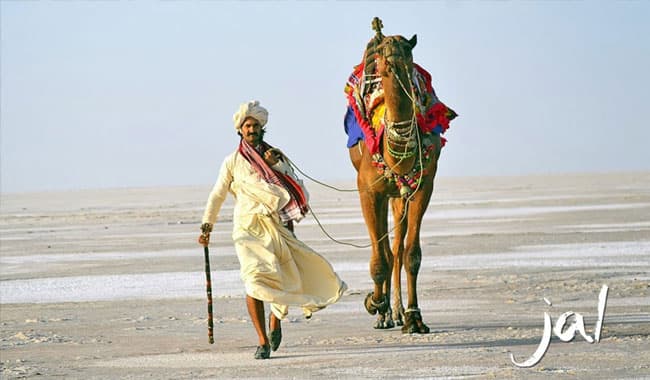 It`s a never-before experience. Tapestried and tempestuous, the tides of Girish Malik`s narrative rise and swell like the frequent sandstorms in the desertscape that Sunita Radia`s camera captures so evocatively in this saga of raging ragas.

There is more than just a little bit of Shakespeare in Girish Malik`s directorial debut. `Jal` leaves you with many fluttering strands of thought swimming in the tormented tides of humanity`s most deprived and financially challenged part of civilization where drinking water is more precious than gold.

Malik`s richly layered narrative sweeps across the Rann Of Kutch landscape in an exhilarating arched sweep that subsumes poetic beauty and human squalor, all in one mesmeric range of vision.

In terms of sheer visual grandiosity, "Jal" is next to none. Women swathed in black running after a woman who has dared to drink from their village well, the offending hero being dragged across the desert by animals like a wolf that forgot its jurisdiction, cyclones and rain conspiring to create an aura of distracting unpredictability... These are the images that etch themselves in the audiences` mind.

Going by the director`s mastery over the medium, you`d find it very tough to believe this is his first film. Malik exercises an enormously flexible yet firm grip over his epic plot. 'Jal' is many things at the same time. The narrative moves in mysterious ways coiling and snaking through circumstances that appear more destined than designed.

And yet here lies the paradox of a work of art - there is a grand design at work here.

The tale unfolds in a multiplicity of enigmatic dimensions, many of them ironical. The very basic idea of a water astrologer in the parched desert who wins and loses his fellow-villagers` faith, is used in the plot as a device to defiantly mock what we call destiny.

The opposition between man and machine and between design and destiny is scripted as a series of anecdotal incidents that serve as pungent punctuation marks in a tale so vivid with characters you want every one of them to have a happy ending. Alas, life is not about rounded denouements.

And Bakka (Purab Kohli)`s adventures with love and life consummate in a sticky tragedy that leaves most of the characters dazed, if not dead.

Vividly, 'Jal' moves from one level of articulation on the relationship between man and nature to another. At some point the chameleon-like narrative assumes the shape of a Rann of Kutch Romeo and Juliet, when Bakka, power-drunk and prophecy-prized, falls in love with the neighbouring enemy village chieftain`s daughter (the sultry and enchanting Kirti Kulhari).

Bakka insists on marrying the enemy`s daughter, thereby triggering off a chain of catastrophic events that leave the village poorer even as we, the audience, come away enriched and nourished by the experience.

The director`s deft defiant and untameable vision knits a blanket of lucid emotions embedded in a well-told narrative that hides a wealth of surreptitious surprises. The scenes are edited to accentuate the uncertainty of a people who don`t know when and where their next drink of water would come from.

Water is war in 'Jal'. This premise gives Malik the chance to create images that convey the immediacy and intimacy of a sudden eruption of gunfire at a sensitive border area. There is a constant sense of doom permeating the canvas. And yet 'Jal' is not an unhappy film. The male characters are vividly played by artistes who seem to merge and blend in the realm of the `registaan`.

You wish the women were more fervently fleshed out. The only two women in Bakka`s life played by Tannishta Chatterjee and Kirti, come across as sensuously silhouetted shadows. Tannishta does have her moments towards the end when she jumps into the climactic point with determined gusto.

But make no mistake. This is a guys` film.

The male actors in their Rann Of Kutch clothes and demeanour are splendidly in-sync with their characters. While Yashpal Sharma as the Russian activist`s obnoxious guide creates a cringe-worthy portrait of overzealous hospitality, Ravi Gossain and the other actors too are completely credible as local villagers.

Purab in his career`s strongest role presides over the maelstrom of operatic overtures exercising a resolute grip over the shifting-sands of his characters attitude and time.

At one point he`s the village`s elected saviour tapping water reservoirs like a magician conjuring rabbits. The next moment he is a cunning traitor and finally a doomed victim whom Shakespeare`s Hamlet would have recognised.

"Jal" makes you wonder why Purab hasn`t made a better place for himself in Bollywood.

The activist wants to save birds in the district.But who is going to save the human beings? The question echoes in the deserts in accusatory spasm.

Malik has designed a film where the characters are constantly on the brink of doom and yet liberated from the scourge of self-pity.

"Jal" is a work of remarkable resonance. The sheer visual mastery of Malik`s directorial debut takes your breath away. The sheer velocity and spatial harmony of the intrinsically disturbed desertscape, the incredibly nuanced sound design and the powerhouse performances by actors who forget the camera is watching them, make this a work whipped into eternity by vast stretches of unchained artistry.

See `Jal`. You will know what I mean.