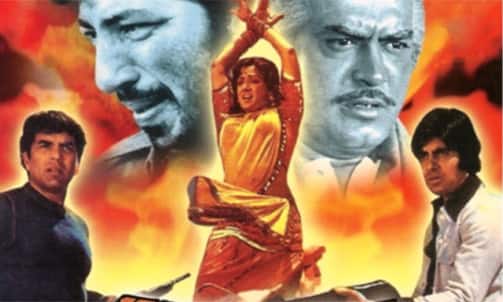 If as William Shakespeare told us, a rose by any other name smells just as sweet, then `Sholay` in any format -3D, 4D or whatever, would remain just the same.

An inviolable classic, timeless, as it is timely. The new version, spruced up with flying bullets and thundering hoofs, comes to us at a time when "Dhoom" is trending. So it`s "Sholay 3D" weighed against "Dhoom: 3".

Undoubtedly, the current films that seem to make so much money seem to pale into flamboyant insignificance when weighed against the hefty impact of "Sholay".

As many as 38 years have passed since "Sholay" and its astonishing lines (Salim-Javed at their pithiest) created immediate and enduring history. Yes, the film opened badly. But then Rome and Amitabh Bachchan`s career weren`t built in a day.

With each viewing of "Sholay", I come away wiser and richer. Yes, this is what `Bollywood` entertainment should always be but seldom is. Rich in drama, vivacious and vibrant in its characterisations, "Sholay" about one armless man`s two-men army and their battle against a sadistic dacoit (Amjad Khan) spawns innumerable eras of cinematic experience.

It is the most well assembled screenplay ever.

With the passage of time, we can view the film in episodes - the stunning train robbery sequence at the start, the massacre of `Thakur` Sanjeev Kumar`s family by Gabbar and his ragged henchmen, Dharmendra`s `suicide` drama from atop a water tower, `Jai` Amitabh Bachchan`s marriage proposal on behalf of his buddy `Veeru` Dharmendra, `Gabbar` Amjad Khan`s Russian roulette in the ravines with his trio of petrified henchmen, `Rahim Chacha` A.K. Hangal`s son`s poignant death scene, the widow `Radha` Jaya Bhaduri`s flashback into a colourful Holi when she accosts her future father-in-law with incessant chatter (Radha could have been Basanti), Jagdeep`s Soorma Bhopali and Asrani`s `angrezon ke zamaanein ka jailor` episodes.... each of these and many others, have a throbbing autonomous life of their own.

And yet, here lies the magic of a monumental classic - all the accentuated episodes come together in a compelling cohesive screenplay which blows your mind.

This is a revenge story with a supremely sustained momentum. The characters show no sign of aging with time. Dharmendra and Amitabh Bachchan`s Veeru and Jai are to this day roguish mercenaries who seem to convey an endearing amorality in their conduct even as they emerge as unlikely heroes in the Thakur`s fight against an oppressively cartoonish outlaw.

They are portraits in contrasts done up in colours that have acquired deeper shades and relevance with the passage of time.

Dissertations, thesis, textbooks and essays have been written on the impact of "Sholay" on commercial Indian cinema. Does the narrative show any signs of wear and tear? Never! Except when monetary amounts meant to be astronomical in 1975 are mentioned.

Thakur Baldev Singh hires the services of Jai and Veeru for a princely sum of Rs.50,000. That in today`s economic context would amount to close to Rs.10 crore. And if you have actors as exceptionally charismatic as Amitabh and Dharmendra playing Jai and Veeru, then the characters seem priceless.

Has there ever been a better celluloid illustration of male bonding than the Jai-Veeru jodi in 'Sholay'? Amitabh and Dharmendra came together once again as Ram and Balram in Vijay Anand`s film. But the same chemistry was missing.

No one can encore the magic of Ramesh Sippy in 'Sholay'. Not even Sippy himself. And what a team of technicians Sippy had! Dwarka Divecha`s cinematography, M.S. Shinde`s editing and R.D. Burman`s background music will never cease to take our breath away.

I always found R.D. Burman`s songs in 'Sholay' to be relatively weak. I still do. But that`s a very small quibble in a film that defies all analyses.

So does the 3D format affect "Sholay"? I`d say "Sholay" in any format is..."Sholay"! Incomparably gripping, flawlessly cast and impeccably mounted, this is the mother of all Bollywood classics.