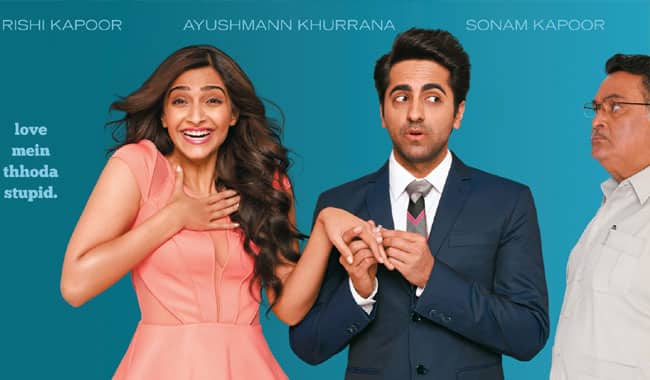 Directed by Nupur Asthana, ‘Bewakoofiyaan’ is a typical story of two young people madly in love with each other and the parent playing the spoilsport.

Starring veteran Rishi Kapoor, Sonam Kapoor and Ayushmann Khurrana, ‘Bewakoofiyaan’, has failed to strike a chord with the audiences.

Sonam Kapoor carries her fashionista persona to the silverscreen yet again and looks drop dead gorgeous. But unfortunately, her fashion statement can do little to save the film. As Myra, Sonam Kapoor, tries her best to help her unemployed and bankrupt boyfriend Mohit Chaddha (Ayushmann Khuranna) impress her father VK Sehgal (Rishi Kapoor).

However Sonam`s performance is under par in this movie. Sonam Kapoor’s bikini sequence may have raised a lot of eye-brows, but even her sizzling-hot screen presence cannot save the film. And not to forget her kissing scene with the ‘Vicky Donor’ star! But beyond this the chemistry between the two stars has not made much of an impression.

Rishi Kapoor has done a great job as the patriarch who is concerned about his daughter`s future and Ayushmann proves to be a good match. The `Vicky Donor` star has proved to have good comic timing in his last two movies, and his boy-next-door image has been played again in `Bewakoofiyaan`

The music by Raghu Dixit is youthful and peppy. Watch the video of `Khamakhan` from the movie. The songs have been penned by Anvita Dutt.

All in all, `Bewakoofiyaan` is a typically clichéd love story. Despite a good star cast it is at most a one time watch.