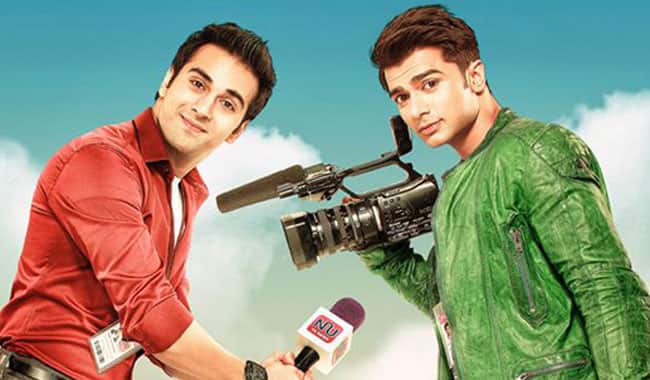 The 2014 general elections are just round the corner and the makers of ‘O Teri’ couldn’t have found a better time to release their venture. Starring ‘Fukrey’ boy Pulkit Samrat and debutant Bilal Amrohi in the lead roles, ‘O Teri’ comes across as an average spoof on the present political system drenched in various colours of corruption.

The idea behind the film is brilliant but the execution leaves you dissatisfied. Director Umesh Bist tries to establish two political parties with corrupt ministers - Anupam Kher and Vijay Raaz - as their representatives.

The film opens with the murder of an honest officer investigating the proceedings of the ‘Asian Games’, a project handled by Kher. Raaz, who belongs to the opposition party, kills the officer with an intention of holding Kher responsible for his death. But his plan takes a wretched U-turn which leads to a sequence of bizarre events.

Prantabh Pratap aka PP (Pulkit Samrat) and Anand Ishwaram Devdutt Subramanium aka AIDS (Bilal Amrohi) are two washed out journalists, who are in search of scam stricken story to impress their boss Monsoon (Sarah Jane Dias), who heads the news channel.

Just when the two give up hope of finding an interesting story of their boss’s “choice”, they bump into the officer’s dead body in their car. The two wannabe “celeb journalists” inform her about the dead body that could help them file a breaking story which could in turn boost their channel’s TRP. The lady in question however, turns out to be Kher’s partner-in-crime.
The filmmaker has tried to showcase corruption at all levels.
Though the producers have refuted reports of the film being based on the Delhi Commonwealth Games, ‘O Teri’, does fall within the bracket of a film inspired by real life events, at least in some way or the other. Nonetheless, the film also covers a variety of other issues in the periphery - presence of manipulative individuals at various spheres in the system ever ready to sling mud at the other, superstition etc.

Pulkit as PP and Bilal as AIDS have done a decent job. Their chemistry may remind you of Amar- Prem (Aamir Khan and Salman Khan) from the cult film ‘Andaz Apna Apna’. However, the two young boys have miles to cover in order to establish themselves as power-packed performers.

As an actor, Sarah will have to work harder but the one who steals the show is Anupam Kher. The veteran will leave you absolutely speechless. Powerhouse of talent- Vijay Raaz does his job well. His dialogue delivery is worth an applause. The support cast - Manoj Pahwa, Razzaq Khan and others have done their parts well.

The dialogues are in sync with the characters and justify the story.

The songs in the film are a total waste. They dilute the whole purpose of the film. Bist could have considered omitting the songs in order to treat the film in a much better way.

‘O Teri’ could have been much better had the makers stuck to realism to an extent. For instance, the scenes with the dead body are funny but do make you wonder if a lifeless body could remain without decomposing. Moreover there is an instance when Monsoon calls up PP to tell him that his life is in danger. That sequence shows a giant loophole in the script.

The film isn’t a complete dud. It has a few good moments scattered sporadically. But had they been in order, ‘O Teri’ with a great concept, could have been a much better product.

Two stars for the film.