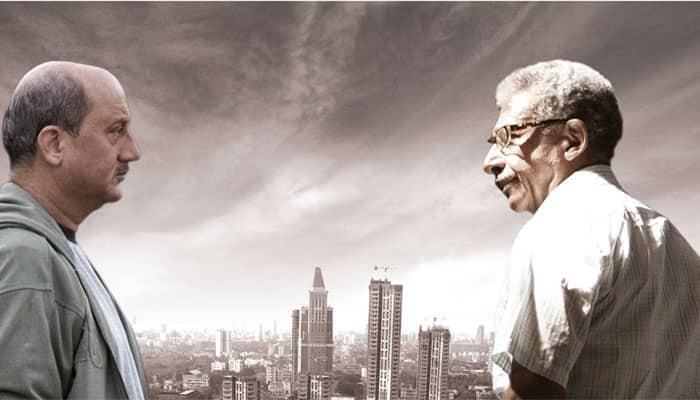 Mumbai: A war of words seem to have broken between veteran actors Anupam Kher and Naseeruddin Shah after the latter apparently took a dig on Kher over his stand on Kashmiri Pandit issue.

According to reports, Shah took a jibe on Kher and said, "A person who has never lived in Kashmir has started a fight for Kashmiri Pandits. Suddenly, he became a displaced person."

Not to anybody's surprise, Kher was quick to revert at Naseeruddin's jibe and tweeted:

Shah Saab ki Jai Ho. By that logic NRI's should not think about India at all.:) Naseeruddin Shah on Anupam Kher https://t.co/UtQrtZ66we

However, the 'Sarfarosh' star was quick to defend himself on the controversy surrounding him and denied making any such statement in the first place.

I have not said any such thing, this is all misreporting :Naseeruddin Shah on his statement on Anupam Kher pic.twitter.com/8mNABd6cHc

Nevertheless, Anupam's tweet on the matter was enough to give some fodder to twitteraties today. Fellow Bollywood personalities like Ashoke Pandit, 'Fashion' director Madhur Bhandarkar came in support of Kher and blasted Shah for taking a dig at the actor.

You don't have to be Kashmiri to fight for #KashmiriPandits plight.Every Indian should condemn the brutality and support their resettlement.

@NaseerudinShah Who are U to question the roots of @AnupamPkher which is #Kashmir. I had thought U were a well read & educated person.

Here, we take a look at how twitteraties extended their support for Anupam Kher:

Anupam Kher shouldn't fight for KP rights as he never lived there, OTOH Nasiruddin Shah signed Yakub's mercy petition as he was his relative