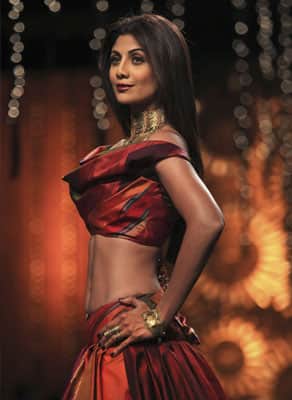 Dressed in a layered kanjeevaram lehenga and draped corset, the 38-year-old actress displayed her hourglass figure and said she feels great to be back on the runway after the birth of her son Viaan Raj Kundra.

"Tarun is family. This is he first time I am walking the ramp after the baby. It is a very overwhelming feeling for me to come back. After the baby, I had put on 35 kgs. I thought I will never be able to fit in his clothes again. I had always thought that if ever I make a ramp comeback it has to be or Tarun`s show. And I finally did it," Shipa said after the show.
Shilpa was also accompanied by Harman Bawaja and Ayesha Khanna, the stars of her debut production venture `Dishkiyaoon`. While Harman looked dapper in a black layered jacket and Jodhpuri breeches, Ayesha was stunning in a black draped tunic and churidaar.

"I am so grateful that Tarun also decided to deck my hero and heroine today. `Dishkayoon` is my second baby. I am very excited about it. I hope people go out and watch the film," Shilpa said.
`Dishkiyaoon` will hit theatres this Friday.

In Tahilian`s collection, gold finery decked the collars and cuffs giving the illusion of layers of golden thread. The tunics stood out. The South Indian Necklace patterns was the inspiration behind the emperor silhouette and the necklines.

In the collection there was a special emphasis on the prints like multi scarf patterns. Unconventional sarees, dhoti skirts, jackets with slits, short crop jackets and long asymmetric kurtas gave traditional clothing a global edge.

"The idea of this collection traces its root in the early tradition of the country when the clothes would mould to fit the body and not vice versa," Tahiliani said.

The show opened with a recitation from a passage of Rana Dasgupta`s `Capital`. Live musicians from Rajasthan added to the Indian feel of the show.

First edition of Gurgaon Fashion Week to begin from April 17