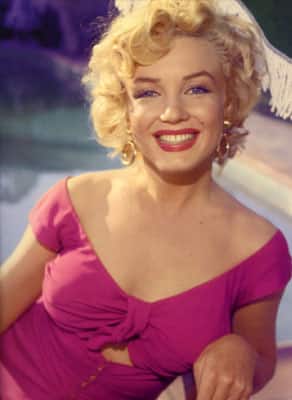 London: Actress Marilyn Monroe`s bold red lips have been voted the most iconic beauty trend of all time, with the sultry smoky eye following closely behind.

The study was conducted by Superdrug, a beauty and health retailer on its 50th anniversary and 2,000 women participated in the poll.

Monroe sported the striking bright pout during the 1950s and 1960s, but most famously in her 1955 film `The Seven Year Itch`. Her look was later copied by musician Robert Palmer’s backing singers in the 1980s video `Addicted to Love` and is favoured these days by celebrities like Gwen Stefani, Paloma Faith and Rita Ora, reports femalefirst.co.uk.

The second most iconic beauty look was the classic dark smoky eyes as loved by singer Cheryl Cole and socialite Kim Kardashian.

False lashes, which first gained popularity in the 1960s and are a must-have look even today, now worn daily by the likes of TV personality Sam Faiers, landed in third spot.

And completing the top five iconic looks was heavy eyeliner, a look popularised by "Twiggy" in the 1960s and is still as relevant today as it was then.

Simon Comins, Superdrug buying director, said: "In recent history there have been some really iconic beauty trends. The fact that some trends have come and gone, and then come back again shows that beauty trends are as cyclical as fashion, and they have all been sported by the famous faces of the day."

The study revealed that one in five women has copied an iconic look from a celebrity and nearly half said famous faces were where make-up trends originated from.

Two thirds of the 2,000 women polled said they wish they were braver when it comes to experimenting with new beauty trends, with the typical woman trying just three of the iconic looks over the course of her lifetime.

Comin added: "The research also shows that the power of a fabulous red lip remains one of women’s favourite and most dramatic beauty looks."

Jazz up your look with statement heels