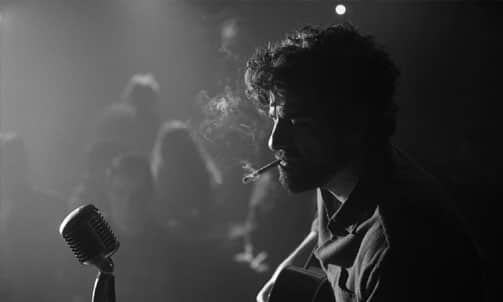 Loosely based on the life of American folk singer Dave Van Ronk, directors Joel and Ethan Coen`s "Inside Llewyn Davis" is a fictional piece that is a fitting tribute to a period and place, which is at the crossroads of cultural change.

The story is from the perspective of an obstinate man, Llewyn Davis who is determined to stick by his belief and look upon everything else with cynicism, including his music. And unlike Dave Van Ronk, Llewyn is a loser who never makes it big.

What makes the film unique is its structure. It`s a simple, conventional and realistic portrayal. But unlike a straight forward narration, this noire story that wraps up in a circle-ending actually happens in the protagonist`s subconscious mind recalling the sequence of events, hence the title `Inside Llewyn Davis`.

The film begins at the Gaslight Cafe in 1961, after an intense and well-received performance of "Hang me, oh hang me", the bar owner tells Llewyn that a "friend" is waiting for him in the alley outside.

Llewyn steps out only to be brutally knocked down. From thence the film unspools in a straight narrative to connect to the initial scene of the film. By the end you realise why he is in the situation that he is in.

The plot that indulges in Llewyn`s humiliation includes him trying to line up gigs, piling up with friends, slumping on different couches, which include impregnating women, his chronic homelessness, his constant hand-to-mouth existence, his strained relationship with his disorientated father and disapproving sister and his tendency to alienate everyone including the people who are generous and supportive.

The film truly belongs to Oscar Isaac. He portrays the disconcerted, cantankerous and self-absorbed Llewyn Davis with unmatched conviction. He is entertaining, as well as engaging from the very start and that grows stronger as the story unfurls.

His performances of songs apart from the initial one "Fare thee well, o honey, fare thee well," and "Green, green rocky road" add a level of painful poignancy to the film.

Mulligan creates her niche as the vitriolic impregnated Jean, filled with angst as she doesn`t know if the baby is Llewyn`s or her hubby Jim`s, therefore she wants Llewyn to pay for an abortion. She is not only funny, but also very humane at the same time.

With two-and-half scene cameos, Justin Timberlake as Jim and John Goodman as a junkie jazz-man are wasted, yet they leave a strong impression with their limited roles.

Visually and sound-wise, the Coens have churned out an excellent atmospheric recollection of a period. It is a winter film and cinematographer Bruno Delhommel casts a cold smeary pallor over everything.

The desolate streets, the snow-filled pathways, the dripping wet socks and grey skyline adds to the pains of a struggling singer.

The film is a typical "Coen" film, with uncharacteristic heroes and weather playing a major role in the narration. This contributes to the already testy nature of the characters and reinforces that some battles are just not to be won.

Nevertheless this is a pleasant enough film, which features its share of standout moments and is a welcome change especially for those who care about the kind of music it honours.

Jennifer Lawrence most bankable actress in 2013