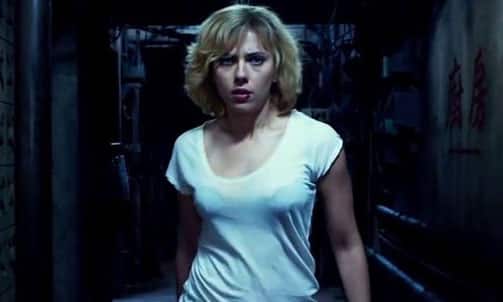 Luc Besson`s `Lucy` bookends with voiceovers that has no co-relation to the subject.

It opens with a voiceover, which says - "Life has been given to us a billion years ago what have we done with it?"

The film closes on a similar note, "Life has been given to us a billion years ago, now you know what to do with it."

Honestly, there have been no lessons in the interim narration. Instead, what we get is a tacky insight into the gritty underworld and drug mafia and a tinge of action and sci-fiction thrown in to titillate.

The premise of the film rests on the contention - what would happen if humans were to explore cent percent of their brain potential?

Packed with silly metaphors and innuendoes like the rat eating the cheese in a rat-trap or the leopard hunting his prey, `Lucy` is the story of an innocent young woman, Lucy (Scarlett Johansson) who is forced to work as a drug mule for a Chinese drug-mafia, Jang (Choi Min-sik) and her condition that co-relates with an academic lecture delivered by Samuel N orman (Morgan Freeman).

In his discourses, the professor suggests what might happen if humans were able to use more than the 10 percent of their brain power.

The drug, CPH4 that is surgically implanted into Lucy`s belly leaks after one of her captors manhandles her. Instead of killing her, the drug works wonders on her. It drastically enhances her nervous system, setting her on a path to unlock the full potential of her brain.

She begins to discover a host of new abilities including morphogenesis, telekinesis, teleportation, mind reading and many other superpowers that defy our comprehension of human physiology.

Now armed with these powerful skills, she can control every aspect of her body`s function, other people`s bodies and finally all matter and energy around her, rapidly evolving into a super being.

It`s basically her journey from a helpless girl to a merciless warrior fighting against the drug mafia.

Jam-packed with sleek action, mindless car chase and punctuated with justifications for the storyline, the film is thin on logic as well as presentation.

The screenplay wavers while it speaks profoundly about, "Time. It i s not only a unit of measurement, without time we do not exist," and "The purpose of life is to pass the knowledge that is accumulating."

All these layers are lost as Besson seems to have charted the script in a hurry and without paying due consideration to its characters and their motivation.

The film is an outright Scarlett Johansson film. She delivers an intriguing performance much beyond expectations. Her transition from a vulnerable girl to an indifferent mutant is smooth, but ridiculed with logical defiance.

The rest of the cast do little to supplement Lucy in terms of humour or relatable empathy. They are mostly there to drag the story forward.

Morgan Freeman as the professor and researcher is wasted. His second scene, where he interacts with Lucy is beyond comprehension.

Overall, despite good production quality, decent visuals, and high action drama, Besson`s fans would be disappointed because of the lack of noir-action drama. For the thinking audience, the same hooks that make the film engaging makes it look ridiculous and absurd.

I haven’t found my prince charming yet: Jacqueline