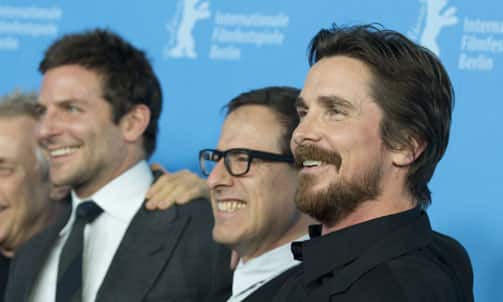 Berlin: The stars of crime caper `American Hustle` Christian Bale and Bradley Cooper said Friday that their director`s `raw` atmosphere on set and risk-taking were behind its 10 Oscar nominations.

Promoting the picture at the Berlin film festival, Bale and Cooper said director and screenwriter David O. Russell`s remarkable haul of Hollywood honours were down to the fact that he was an actors` filmmaker.

"You must trust the director completely. Plot should never trump character. That`s what makes it so nice and enjoyable as an actor because it shows that he`s actually enjoying the same things that actors enjoy," said the British Bale, who is nominated for an Academy Award along with all three of the film`s other main actors: Cooper, Amy Adams and Jennifer Lawrence.

Bale, who gained a beer belly for the role, said Russell had been willing to scrap key plot elements during the filming of `American Hustle`, which was based on a 1970s FBI sting operation known as ABSCAM.

He added that Russell went as far as to hide on set to stay close to his actors when they were filming difficult scenes.

"You don`t feel like you`re really alone in the process, he`s right there with you emotionally," Cooper said.

"As raw as the environment is... it`s very alive.

"That`s sort of why I would ever want to be actor, to be in that kind of arena with these type of people."

Russell said he tried to push actors beyond their usual limits, making them unrecognisable in parts such as Bale`s Oscar-winning turn in `The Fighter`, Cooper in `Silver Linings Playbook`, or the 1970s macho types with elaborate hairstyles they play in `American Hustle`.

"We were all taking huge risks, it was a high-wire act, every single actor playing a role they had never remotely played, me doing a movie I had never done like that. Failure is very exciting and frightening."

Hoffman could be digitized to complete `Hunger Games` film