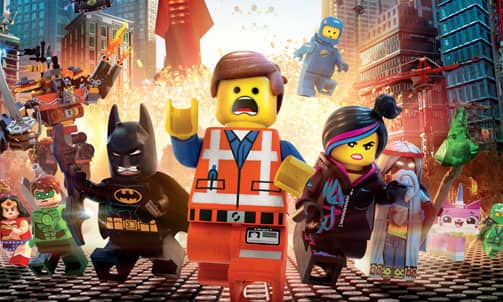 Jam-packed with motivational lessons, wacky dialogues and crazy impertinence, 'The Lego Movie' is a blast for kids and adults alike.

Initially, it feels strange to be transported to the Lego Universe where everything is endlessly complex, yet elementary, clunky and crude, just like the Lego toys themselves. But once you are in you get hooked, line and sinker.

The plot here revolves around the Lego philosophy, "learning through play and creativity." It strongly puts forth this point and makes you realize with rhetoric questions like; "Can you live in this world if you think, outside the box?" Or "Is there a balance to be struck between following the instructions and being creative by using your imagination to make something of your own?"

The narration starts off with Lego Land being ruled by a control freak President Business (Will Ferrell) with world domination on his mind. With a constant disregard for creative people, he spouts, "We need ideas so dumb and bad, that people will not think them to be useful."

His dictatorial biddings are carried out by the split-personality Cop (Liam Neeson) who swings from being Good Cop Bad Cop.

On the other end, a lone construction worker Emmet (Chris Pratt) lives life by the book. Being a builder he always makes the sets exactly as they are supposed to be, demolishing those which do not conform to the instructions. He doesn't seem to make much of an impression on anyone else around him, although he scrupulously follows the instructions about how to make friends too.

His life turns topsy-turvy when one night he follows a trespasser, the enigmatic and charmingly beautiful Wildstyle (Elizabeth Banks). He end up falling into a construction excavation pit and stumbles across the mysterious red block "Piece of Resistance" and, in the process, is earmarked as The Chosen One, the one prophesied to reunite the great Master Builders and remove Lord Business from power before he destroys their world.

He immediately becomes a target of the police and during a brief period of capture, he learns that the seemingly benevolent President Business intends to destroy the world in a couple of days, by unleashing a super-secret weapon known as the Kragle.

Breaking out with Wildstyle's help, Emmet soon discovers many Lego worlds beyond his own, and finds his way to thwart the evil plan.

Visually, the action itself is reckless, sprawling and elaborate, without being confusing. It is exciting to see their extensive adventures executed within the miniature world of the tiny pop-apart pieces of the little building blocks. The water, the flames, the ship and every little element that is a part of their universe animated but still obviously meant to be the kind of small plastic accessories from the toys.

The voices of the celebrity star cast aptly match the characters. They accentuate the action and enhance the jokes which appease both older and younger audiences. The soundtrack, "Everything is awesome" is catchy and a sure-fire chart buster with kids.

The animation in the film is achieved using an ingenious combination of computer generated images and stop motion, and the entire film has a palpable quality that makes you want to reach out and play with it. In 3D, this sensation is amplified and intensified, taking you into the Lego Universe more deeply and authentically.

Directors Christopher Miller and Phil Lord, who had earlier delivered the first installment of, 'Cloudy with a Chance of Meatballs' and '21 Jump Street', have managed to assemble this film with apt meticulousness.

They have co-scripted the film from a story by Dan Hageman and Kevin Hageman who have earlier written 'Hotel Transylvania'. With wit, action and emotion, woven in equal measure, Miller & Lord have succeeded in making it difficult to resist revisiting the film.

Will `Robocop` be the future of warfare?