Have strong allergy to this word comeback, says Amol Palekar

Veteran actor Amol Palekar, who is all set to return to Television, says he has a strong allergy to the word comeback. 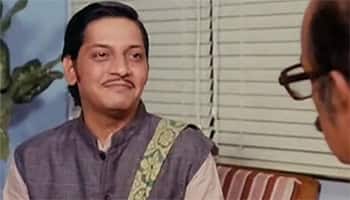 Mumbai: Veteran actor Amol Palekar, who is all set to return to Television, says he has a strong allergy to the word comeback.

The 70-year-old actor will be seen on the small screen in the upcoming Hindi TV show 'Roshni... Ek Nayi Ummid', which will be soon.

"I have a strong allergy to this word comeback. I don't think there is any kind of comeback. I was an actor by accident. So how that accident happened that I have said several times," the 70-year-old actor said here.

"But I chose to become a filmmaker and so I stopped acting. But having stopped acting I had never closed the shop if there was something interesting, challenging, different I would be happy to do so," Palekar said.

"'Roshni...Ek Nayyi Ummid' is a medical drama based on the backdrop of clash of ideologies within the family.

"I liked the content, the approach of the production team and whatever was told and promised to me is happening I am enjoying it. I was very happy to be part of this show," the 'Golmaal' star said.

Industry colleagues of Palekar had warned him about the long working hours of television.

"I had heard horror stories about television scenario from my colleagues and particularly daily soaps how they shoot, how people have to work round the clock.

"I was assured that nothing of that sort happens here and I can vouch for that we are working nicely as professionals and enjoying our work," he added.

come to work next day. I don't believe in working if I am not enjoying. If I don't enjoy then others will also not enjoy," Palekar said .

While the titular character of Roshni is played by Pooja Gaur, Palekar will be seen in the role of a doctor.

Palekar has previously been a part of many TV series like 'Kachchi Dhoop' and 'Aa Bail Mujhe Maar' among others.

"I was associated with TV when there was only Doordarshan. From there to now there has been a tremendous progress. We have seen Television as an industry go a huge change. Today different kind of content is being used on television," he said.

When asked if this show is inspired by international series 'The House', Palekar says, "No it is not that. It is not related to any series. I do watch some of the American series. I am an ardent fan of 'The House'. Even the 'H' of the house is also not part of this show."