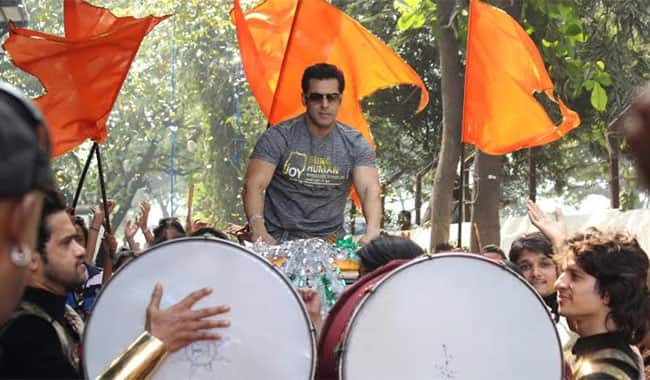 A splashy, flamboyant entry that sends on-looking fans into an uncontrollable frenzy is a must when you have a rockstar as BIG as Salman Khan making an appearance on a television show! So, out came the dhol-tashas, the nagadas and the tutaaris when it was time for Sallu Bhai to visit the sets of India`s top-rated dance reality show, ‘Dance India Dance’ ... but as if all of this wasn`t enough, Salman zoomed in to the venue, standing unabashedly atop a convertible auto rickshaw with its top torn off just like the superstar tears off his own shirts.

Just like his entertaining entry, Salman`s time on the sets was full of fun, light-hearted moments that had Grandmaster Mithun Da, the judges, hosts and contestants in splits. He was clearly in the mood to just let go and have a ball. Be it his lively interaction with a kabutar that flew in to the sets, reminding him of his Maine Pyar Kiya days and his hit song Kabutar Ja Ja Ja or the time when he actually went up on stage to make some candy-floss for his biggest fan - the talented contestant Swarali, Salman was on a roll!

While the spirit on the sets was one of tom-foolery, there was one man who was driven to tears when Sallu Bhai spoke of him. The superstar`s own discovery - DID Judge Mudassar Khan. When Salman revealed how he spotted Mudassar performing impressively at a mall in Indore in the course of the promotional campaign for his film `Wanted` and immediately approached him to work for him, Mudassar fought back tears and acknowledged that his meeting with Salman was the turning point of his life. There has been no looking back since then and he owes it all to the magnanimous actor. Salman corrected him saying that he took Mudassar on with his own personal career interests in mind, not as an act of charity. "You ought to give yourself some credit for your own success as I would never have approached or recommended you had I not found you to be extraordinary and talented."

Salman spoke equally highly of his Jay Ho co-star Daisy Shah, another assistant choreographer he`d spotted on the sets of his previous films. He`d encouraged her to try her hand at acting, after noticing her striking good looks and natural grace. The duo was mighty impressed with the acts put together by the contestants, especially Sumedh and Manan who performed to Humko Maloom Hai from Salman`s film Janeman. Even as the boys were impeccable in their form, style and finesse, they brought alive the special bond of a guru and his protege through their act in the most touching manner. It naturally left both Mudassar and Daisy choked with emotion as they look up to Salman as their mentor.

To bring back a lighter mood, Salman leapt up on stage and danced with Dada and Manan-Sumedh to his famous Dhinka Chika, leaving the audience roaring for an encore!

Stay tuned to all this action and more in an action-packed Salman special episode of 'Maruti Suzuki Dance India Dance powered by Quikr.com' on Saturday, 18th Jan at 9 PM, only on Zee TV.

`Gavin & Stacey` may be turned into movie