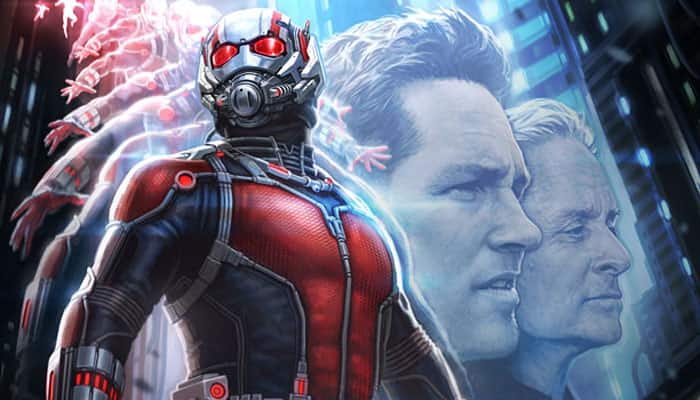 Slipping into another Marvel Cinematic Universe seemed a tad monotonous. Honestly, I did not expect much from "Ant-Man", and the result was a sheer surprise.

With simple, natural characters and an uncomplicated, yet spirited plot line, "Ant-Man" is a visually engaging and entertaining film. An unlikely hero getting convinced and trained to become a super-hero is the premise of the film which woos the audience.

Here the decent, Scott Lang is an intelligent thief and an earnest father who after being released from jail is desperate to be united with his daughter Cassie. He wants to redeem himself and start life afresh.

But after a couple of unsuccessful attempts for a stable job, he opts out to work for a scientist, Hank Pym, who is the creator of the magical shrinking serum that creates the Ant-Man.

While, Hank Pym convinces Lang to perform a heist to prevent the technology from falling into wrong hands, especially that of his greedy megalomaniac former protege Darren Cross, his daughter Hope is not convinced of Lang's abilities. She wishes to adorn the Ant-man costume to prove a point to her father.

The plot, with ample conflicts, shuttles between family drama that is created with a rather earnest atmosphere and "saving the world," sci-fiction tropes, which include internal jokes and cameos from the Marvel Universe. The complications are laid out in steps, one-by-one, and provide a series of payoffs with the completion.

The film largely revolves around Scott Lang and what keeps you hooked is Paul Rudd's performance as the super hero Ant-Man. With his diminutive frame and charismatic looks, Paul effortlessly slips into this simple and likeable character with ease.

He is ably supported by Michael Douglas as Hank Pym, Evangeline Lilly as Pym's daughter the agile Hope, Judy Greer as his ex-wife, Bobby Cannavale as a police inspector and his ex-wife's current beau and Abby Ryder Fortson as his daughter, Cassie.

Apart from Rudd, it is Michael Pena as Lang's friend, Louis who shines in his limited screen time. He surprises us by embellishing his stereotypical character with subtle humour, thus making him stand apart.

On the action and technical front, the scenes where Lang masters the art of size-shifting are amusing. In fact, it is bound to remind the adult audience of the 1989 Disney released film, "Honey I Shrunk the Kids".

Here, the action sequences have a real punch once Lang gets the hang of manipulating his way through. His exploits are thrilling and infectious.

On the visual front, the shrunken worlds use a lot of macro photography to maximise the effect of depth and the computer generated images mesh well with the motion capture frames. The 3D effects and background scores are add-ons that elevate the viewing experience, created by the razor sharp flawless edits.

On the flip side, one could argue on the weird logic of Ant-Man's ability to communicate and control ants and no other creatures. Also, being a super-hero film, the antagonist is too generic and inconsequential to register.

Nevertheless, whatever the pitfalls, director Peyton Reed's "Ant-Man" is a breath of fresh air by Marvel's standards that will appeal to children and adults alike.