Although the movie is not satisfying as a horror drama, it dazzles for its visuals 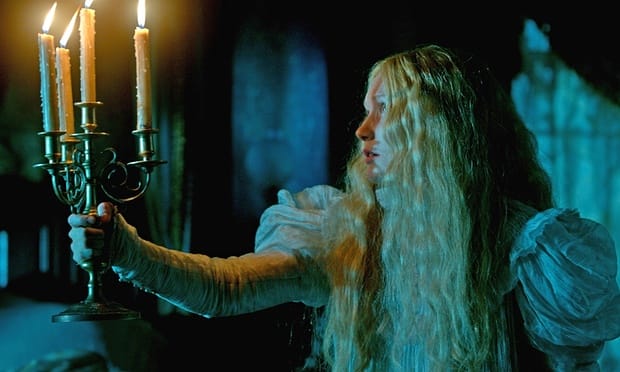 "It is not a ghost story. It is a story with a ghost in it," this oft-repeated line in the film is a reminder that director Guillermo Del Toro's "Crimson Peak" is difficult to slot into any defined category or genre. The film is a psychosexually violent romance with ghosts dramatically emerging from the floors, doors and eerie hallways.

Never entirely satisfying as a horror drama or a romance spectale, the film is visually dazzling. The period Gothic setting along with the archaic palatial mansion, the weather-beaten locales, the atmospheric lighting and the evocative performances keep you hooked.

The scary scenes begin early on. During the prologue, young Edith Cushing admits: "Ghosts are real. That's what I know, the first one I saw was, when I was 10, of my mother."

Sir Thomas, who is there seeking capital to finance his invention, a dredging machine, along with his sister Lucille (Jessica Chastain), soon makes his way into the aristocratic circle of the Cushings.

At the onset of their relationship, during their very first dance, Thomas states "I always close my eyes when things are uncomfortable. It makes things easier", to which Edith replies "But I don't like closing mine", clearly indicating that they are a mismatched couple.

Then after a rocky courtship, Thomas proposes to and marries Edith. He then whisks her away from friends and family to his ancestral Estate Allerdale Hall, in Cumberland, Britain. It is here that Edith learns about her new family's dark secrets.

Wasikowska plays Edith with panache and her gradual transformation from a self-assured lady into a damsel in distress is remarkable. Her character is simple and straight-laced compared to the complexities of the brother-sister duo, played by Hiddleston and Chastain.

Hiddleston nails his role as the enigmatic and layered Thomas Sharpe. He does not betray his emotions when he is rebuffed by Cushing with "In America, we depend on effort and not privileges, that's how we built this country", nor when he is asked to break Edith's heart.

But it is Chastain as the emotionally manipulative and malevolent sister who, although predictable, steals the show with her violent outbursts and icy performance.

Beaver as the over protective father and Hunnam as Doctor Alan, in small yet pivotal roles, are charming but wasted.

With the construction of the tale that is predictably manufactured, it is the location and fine production values that take the centre stage of the narration. The Allerdale Hall with its crimson clay, which is mined from its grounds, creates blood-red footprints in the snow, making it an ideal back-drop for a picturesque horror tale to unfold.

And knowing the directors penchant for insectile imagery, in order to infuse visual or poetic beauty, he has used ants and butterflies metaphorically.

These computer-generated images along with that of the fine smoky textures of ghosts in 3D effect, merge with Dan Lausten's cinematography seamlessly, giving the film an aesthetic feel.

But overall, the film does not tug at you emotionally.