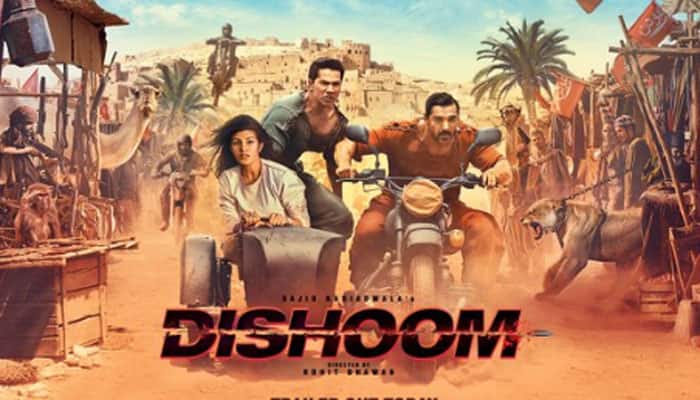 The title of the movie is a clear indicator of all what we can expect from it. 'Dishoom' is an out-and-out masala Bollywood potboiler. It's a story about how India's top batsman Viraj Sharma (yes yes we know it's a sly reference to certain Mr Virat Kohli) goes missing just before the crucial match against Pakistan. Audience response? High on emotion is the answer.

Of course, what else do you expect in a cricket crazy nation! Viraj is played by Saqib Saleem and he has but a brief role on-screen. However, whatever time he is on, the game is in control.

John Abraham gets an impressive entry in the film where he kicks a man hard while smoking his bud which by the way is injurious to health (and we keep hearing this throughout the film). John aka Kabir is a tough cop who has been put on duty by the Indian side to nab down the man who has kidnapped Viraj.

Interestingly, his chase takes him to the Gulf city where Varun Dhawan awaits him. The latter plays Junaid Ansari, who is a happy-go-lucky cop (basically, has done nothing worthwhile so far). His stars change when Kabir meets Junaid, and the rest they say is 'bade miyan chhote miyan' in store.

Yes! The bromance between the two will give us major feelers for wanting to see their jodi again on-screen. No , I am not hinting towards a sequel guys! Then this hard-looking guy and 'Main Circuit Nahi Hoon' saying Junaid meet Ishika (Jacqueline Fernandez). How it happens I am not going to reveal.

Jackky looks fresh and much in control of her acting than some of her previous outings. Although, she has a brief part to play, yet her presence calls for a full frame. The most surprising and perfect casting seems to be that of Akshaye Khanna. The class actor has played a negative character of Wagah in the film quite convincingly.

His portrayal of a man trapped in betting scandal makes for a good watch. Rohit Dhawan's directorial is an entertaining one, especially if you are going either with friends or family. Music by Pritam and background score by Abhijit Vaghani needs a special mention too, as most of the tracks are foot-tapping and engaging. There is some kickass action too in between to keep you on the edge of your seats.

You will be in for yet another surprise once you see what Akshay Kumar has in store for his fans. Total killer, we must say!

The only thing which bothers is the fact that a lot of stuff happens while you still try to figure out the scene. But maybe that's because the entire film runs on a 36-hour-long deadlock. Be ready for many highs but do not think on 'how is it possible?'. Do not forget, it's Bollywood and nothing is impossible.

Go 'Dishoom' for a weekend blast!