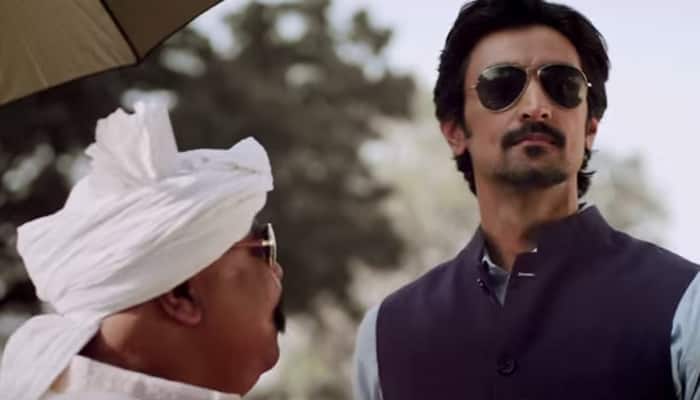 Based in post-independent India, in rural Odisha, ‘Kaun Kitne Pani Mein’ is a socio-political satire set against the backdrop of water scarcity. It speaks of how tables turn with constant change in situational dynamics. The phrase which forms the title of this film, is apt for this fable.

While the film deals with the class and caste system and the changing undercurrents between the ruler and his subjects, it is a conniving, complex and manipulative tale laced with sub-plots of father-son bonding and romance.

At the onset we are informed that there are a long-standing differences between the villagers of ‘Upri Gaon’ and the ‘Bairi’ (lower caste).

Living in Upri Gaon, the once rich Raja Braj Kishore Singh Deo (Saurabh Shukla), is the last of the feudal lords who is now living in penury. His land has been hit by draught for many years and he is now keen to sell his land.

Unfortunately, no one is willing to buy it. His son, the Rajkumar (Kunal Kapoor) returns from the city only to curse his father and his luck.

On the other hand, the land of the Behiris, is flourishing under the leadership of a wannabe politician, Karu Phelwan (Gulshan Grover). With water there, the place is fertile and green and consequently the people are happy souls. In factm he states, "Raja, woh jiske paas paani hai”.

Raja Braj convinces his son with, "Main jaat nahin, halaat manta hoon” to manipulate his way into the folds of the low-caste people in order to get water from their end. This forms the crux of the tale.

Saurabh Shukla essays Raja Braj's character with sluggish ease. It is amusing to watch; his servant, ‘sevak’ literally dress him up, him slouching with his lazy demeanour, drinking and basking in past glory.

Kunal Kapoor as the Rajkumar with a progressive and malleable mindset, is charming. He oscillates between a conniving son and romantic with equal grace. He romances Paro (Radhika Apte), Karu Phelwan's daughter and their on screen chemistry is palpable.

Radhika shines as Paro, but unfortunately since the tale is packed with too many issues, their romance does not get enough screen time and hence appears perfunctory.

Gulshan Grover walks through his role as Karu Phelwan. The rest of the supporting cast members are natural and you do get transported to rural Odisha.

On the technical front, the script written by director Nila Madhab Panda and Deepak Venkateshan begins on a boring note. The first act, loaded with a preachy voiceover exposition layered over 2D graphics, makes the film look amateurish. But as the narration progresses, you get involved with the characters and are hooked.

Humour is strewn sporadically in the form of rustic witty dialogues. Unfortunately, the inconsistency in the accents and the dialect maars the consistency of the flow.

With decent production values, the locales and setting look natural and are efficiently captured by Subranshu Das's cinematography.

The background score and songs merge elegantly into the tale. But it is the beautifully choreographed folk dance on the song "Rangapati, Rangapati" which stands out.

Overall, the film has the look, feel and charm of a bygone era.