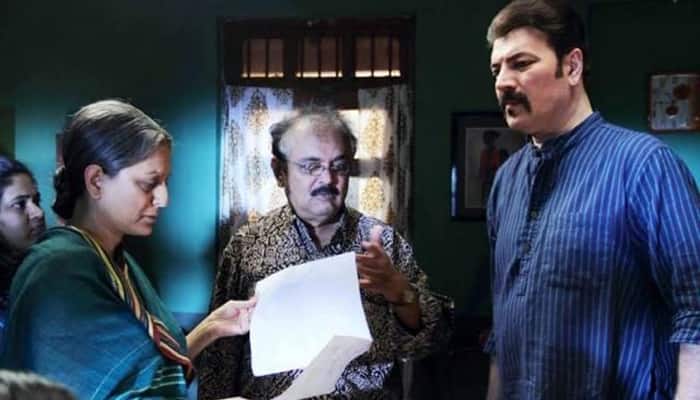 With the title taken from the legendary Mahendra Kapoor's song of the 1968 released film "Kismet", your expectations soar. But alas! They crash after the first scene. Steeped in mediocrity from the word go, the film is a medley of songs strung together on a poorly written script.

Arsh (Vije Bhatia) is a singer who wants to make it big and moves to Mumbai with one year in hand from his father, else he has to return and join his father's business. Old songs are his forte and he enthrals passers-by as a street singer.

Swara (Krutika Gaikwad), from a middle class Maharashtrian family, stops to listen to his songs daily as she too is fond of old numbers. One day she joins in for the female part of the duet with Arsh and their friendship begins.

A series of performances at people's house parties makes them a formidable pair. Expectedly, they fall in love and Arsh proposes to her. Swara refuses as she has a past. This forms the crux of this film.

With a medley of old numbers ranging from the romantic "Laagi choote na" to the racy "Aaj kal tere mere pyaar ke charche" and "Dil tera deewana hai sanam" to "Hum toh tere aashiq hain sadiyon puraane", the first half of the film is narrated only through these songs in the form of performances by the lead pair. Needless to say there is no story progression and the film stagnates till intermission.

Post interval, the film regresses further. The plot is akin to films of the 1970s with a drunkard husband Vithal dada (Aditya Pancholi), ill-treating and abusing his helpless wife, and his mother (Kishori Sahane).

With a one-dimensional track, the script is lopsided and weak, with no entertainment value except for the old numbers. The characters are cliched and half-baked with no graph.

Vije Bhatia as Arsh is a Ravi Kishen look alike. He appears confident, and delivers what is expected of him, in an average performance. Krutika Gaikwad as Swara seems to belong to another era. Her dialogue delivery is pathetic and her screen presence insignificant.

Arun Bakshi as Hasmukh the organiser, is the only saving grace perhaps, with some energy that he brings on screen. Aditya Pancholi as the quintessential baddie, seems to be an extension of his usual self in films. Kishori Shahane as his Aai, plays the Nirupa Roy kind of mother of yesteryears.

Anju Mahendroo as the socialite Mrs. Narang adds nothing new to her cliched performance and get-up.

Cinematographer Kasturi Shelar captures the sights of Mumbai in a montage in the opening scenes rather well. However, these oft-used frames, tend to get a little repetitive. The music by Reet is a sad remix of the original great songs by stalwarts like Mahendra Kapoor, Mukesh and Mohammed Rafi. Pleasing to the ears, these songs however fail to recreate the magic of the originals.

With average production values, the film is not appealing aesthetically either.